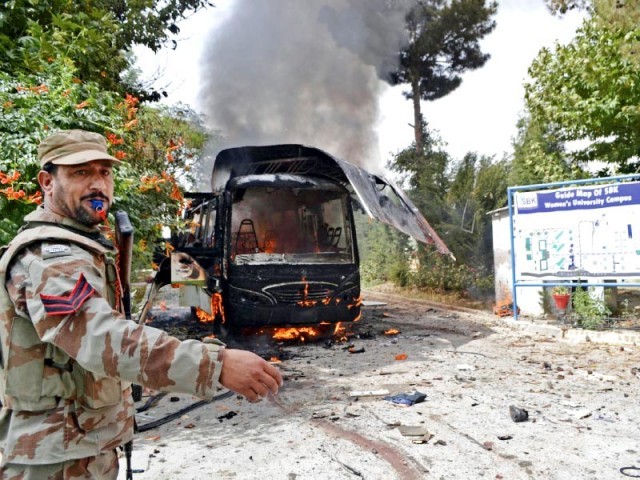 QUETTA: Balochistan bleeds once again. The Lashkar-e-Jhangvi massacred 28 people in the long-suffering city of Quetta in what is the first major terror attack after the new government took power. And hours before this latest outrage came a blow at the country’s very heritage, this time by the BLA, who destroyed Quaid-e-Azam’s residency in Ziarat

At least 28 people — among them 14 students of the lone women’s university of the province — were killed when terrorists bombed a bus and then seized parts of a hospital treating survivors of their attack. The outlawed sectarian extremist group, Lashkar-e-Jhangvi (LeJ), claimed credit for the grisly attacks.

The siege lasted for several hours and ended when police commandos stormed the building, freeing 35 people who had been taken hostage, Interior Minister Chaudhry Nisar told reporters in Islamabad.

According to police, terrorists remotely detonated a bomb on the bus carrying students from Sardar Bahadur Khan Women’s University, which is located close to a neighbourhood of the Shia Hazara community.

Officials, however, said the attack wasn’t targeted at any particular community or ethnicity, adding that students from all ethnic and communal backgrounds study in the university.

The injured students were rushed to the Bolan Medical College Teaching Hospital where LeJ terrorists had already seized parts of the building, taking dozens of people hostage, including government officials, relatives of the victims, doctors and paramedics.

“As casualties were being brought to the hospital terrorists had taken position inside the hospital building,” Nisar said. “They opened fire on administration and police officials who arrived at the hospital. One suicide bomber blew himself up in the hospital,” he added.

“Over six armed men barged into the Emergency Ward and the people present inside started running outside in panic,” Dr Abu Bakar, who was also injured in the blast, told The Express Tribune. “The attackers were armed with AK 47 assault rifles and wore suicide vests,” he added.

Deputy Commissioner Abdul Mansoor Khan Kakar, Medico-Legal Officer of BMCTH Dr Shabbir Magsi, four FC personnel and as many nurses were killed and several others injured in the suicide blast and subsequent firing.

The casualties, including Assistant Commissioner Anwer Ali Shar, an FC captain, a senior police officer and a news channel reporter, were driven to the Civil Hospital and the Combined Military Hospital.

Policemen and FC troops surrounded the complex and engaged the terrorists in a firefight. “The terrorists fired randomly at any movement from their vantage point,” CCPO Mehmood said.  Journalists and some senior police officials ducked behind vehicles in the parking lot overlooking the Emergency Ward of the hospital.

Around 7pm police and FC commandoes were called in. They secured most parts of the building and pinned down the terrorists in a room where government officials, doctors and relatives of the victims were held hostage. Just as they were closing in on the terrorists, another suicide bomber detonated the explosives strapped to his body.

Helicopters flew overhead as commandos stormed the building. Personnel from FC, anti-terrorist police force and Balochistan Levies had virtually sealed off all entry and exit points of the building by then.

“The siege continued for about four hours and ended when three of the terrorists blew themselves up,” said FC spokesperson Abdul Wasay.  Interior Minister Nisar said that four terrorists were killed during the operation while one was captured alive. “He has been shifted to an undisclosed location for interrogation,” Nisar added. It was not immediately clear if any of the terrorists managed to escape.