The handov­er of the last 95 distri­cts from NATO to Afghan forces includ­es many of the most volati­le areas.
By AFP
Published: June 15, 2013
Tweet Email 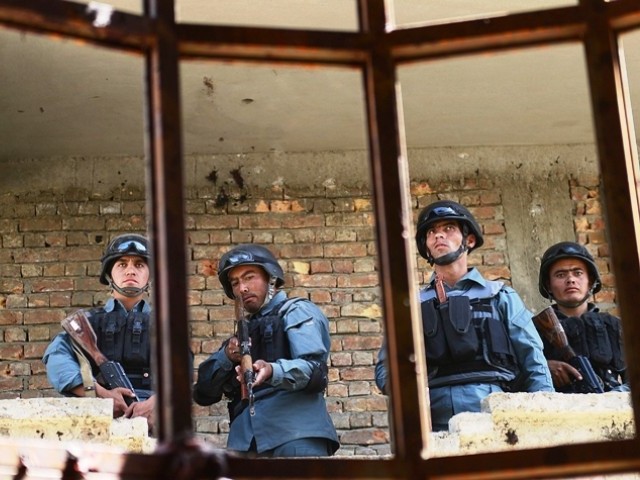 Afghanistan policemen stand guard in a building which was used for an attack. PHOTO: AFP

KABUL: Afghan security forces will soon take over responsibility for the whole of the country, officials said Saturday, a major milestone as the NATO-led war effort winds down after 12 years of fighting.

The handover of the last 95 districts from NATO to Afghan forces includes many of the most volatile areas of south and east Afghanistan where the Taliban have fought a bloody insurgency against the US-backed government since 2001.

NATO and Afghan officials, who declined to be named, said that President Hamid Karzai would attend a formal ceremony within days to mark a key point of the “transition process” to full Afghan sovereignty.

The exact date of the handover has not been announced, but it will complete a programme started in March 2011 when relatively-peacefully areas home to about 20 percent of the population were put under Afghan security control.

The last “tranche” of districts includes 13 in Kandahar province, the birthplace of the Taliban, and 12 in each of Nangarhar, Khost and Paktika provinces – all hotbeds of insurgent activity along the border with Pakistan.

After the handover, 100,000 NATO forces will only play a supporting and training role as Afghan soldiers and police take the lead in the fight against the militants who were ousted from power after the 9/11 attacks.

However doubts remain over the ability of the 350,000-strong Afghan forces to thwart the Taliban, and the NATO military coalition will retain an important role in logistics and air support as well as in combat when required.

The Afghan army has suffered a sharp rise in casualties as it has taken on more frontline fighting, and it is also undermined by a high desertion rate that means thousands of new recruits are needed each month to fill its ranks.

On Friday, NATO commander General Joseph Dunford expressed concern over whether the progress made in Afghanistan since 2001 would be backed by enough international support.

“The gains that we have made to date are not going to be sustainable without continued international commitment,” he said.

Recent major attacks have demonstrated the Taliban’s ability to strike the capital Kabul as the country prepares for next year’s presidential elections and the NATO withdrawal by the end of 2014.

A suicide car bomb on Tuesday killed 15 civilians outside the Supreme Court a day after gunmen fired grenades at the city airport, while an international aid group’s compound was targeted in a seven-hour battle late last month.

Did you know?: Unrest in Istanbul calmed by pianist