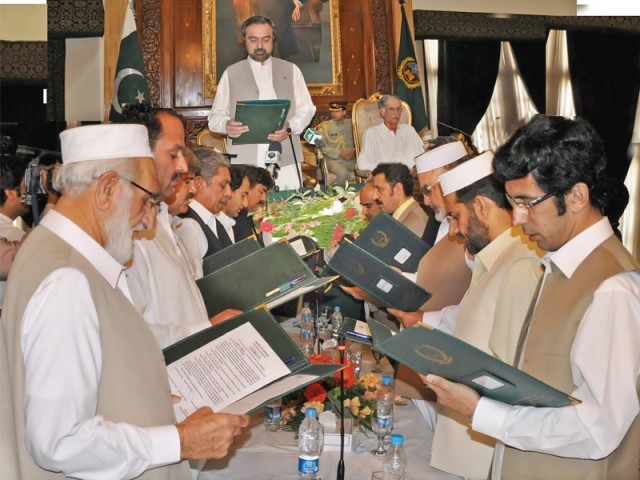 No female lawmaker managed to secure a piece of the pie.

The newly-inducted cabinet of the Khyber-Pakhtunkhwa (K-P)government presents a diverse combination, with experienced ministers sworn in alongside those who will avail the opportunity of running their assigned portfolios for the first time. No female lawmaker, however, managed to secure a piece of the pie.

Considered the most influential figure of Pakistan Tehreek Insaf’s (PTI) provincial chapter, Yousafzai has been awarded the information and health ministries. Born on February 1, 1963 in Bisham Qilla, Shangla district, Yousafzai has a BSc degree in Agriculture from Agriculture University Peshawar along with a professional background in journalism. He has been the chief editor of Daily Surkhab since 2001.

Yousafzai joined PTI in 1996 and unsuccessfully contested the 1997 general elections from Shangla. Before emerging as PTI’s provincial general secretary in the intra-party elections held in February, he acted as PTI Chairman Imran Khan’s political advisor and convener of the PTI K-P organising committee.

Shah Farman took oath as the Minister for Public Health. He is widely regarded as the most vocal person of PTI in Khyber-Pakhtunkhwa.

Born in March 1965 in Badhaber, Peshawar, Farman has a bachelor’s degree in law from Khyber Law College and is one of the founding members of PTI. Like Shaukat Yousafzai, he has been elected member of provincial assembly for the first time.  Farman joined the party in 1996, and since then, has been appointed on various important party slots including district Peshawar general secretary, district Peshawar president, provincial joint secretary, provincial secretary information and political advisor to PTI chief Imran Khan. Farman is believed to be a close aid of PTI provincial president and newly-elected assembly speaker Asad Qaiser.

The JI’s central deputy chief is a seasoned politician from Upper Dir. He was senior provincial minister in the MMA government and is now the party’s parliamentary leader in the K-P Assembly. Haq has been inducted as the Minister of Finance in the PTI-led government.

The QWP’s provincial president has secured victory from Charsadda for the third consecutive time. Sherpao is also the QWP’s parliamentary leader in the K-P Assembly and has been inducted as Minister for Irrigation, Power and Energy. He is the son of QWP chief Aftab Ahmad Sherpao.

After winning from Buner on a JI ticket, Rahman has been given the zakat and ushr portfolio in the provincial cabinet. He was elected as an MPA on a JI ticket in 2002, and belongs to an influential political family from the area.

Former district nazim in Swabi, Tarakai is now the provincial president of the Awami Jamhori Ittehad Pakistan (AJIH), a Swabi-based political party. He has been sworn in as agriculture minister and belongs to a well-known industrialist family in
the area.

Hailing from DI Khan, Gandapur won the PK-64 constituency on a PTI ticket and is the party’s president for the province’s southern region. Gandapur belongs to an influential political family in the region. His father, major (retd) Aminullah Gandapur, was a caretaker cabinet member in former president Pervez Musharraf’s tenure.

Hailing from Kulachi, DI Khan, Israrullah Gangapur was elected MPA from PK-67 (DI Khan-IV) as an independent candidate. He later joined PTI and has now been given the Law and Parliamentary Affairs ministry. Being the son of the then NWFP chief minister Sardar Inayatullah Gandapur, Israrullah also served as a member of provincial assembly in 2002 and 2008.

Yousaf Ayub Khan has been awarded the Communication and Works portfolio. Born in August 1963 in Haripur, he has been active in politics since 1988 and was elected member of the provincial assembly for the third time in the 2013 general elections. Having an influential political background, Ayub has served as District Nazim Harripur and provincial education minister of PML-N from 1997 till 1999. He joined PTI in 2012 and is currently a member of PTI’s regional steering committee.

Hailing from Matta in Swat, Mehmood Khan was elected from PK-84 (Swat-V) and has now been inducted into the provincial cabinet as Minister for Higher Education. Previously, Khan’s family was associated with Pakistan Muslim League-Nawaz (PML-N) and Pakistan Peoples Party (PPP). However, soon after the 2008 elections, they joined PTI. Since then, Khan has remained an enthusiastic activist of the party. In the 2005 local body elections, he was elected Union Council (UC) Nazim of Kharerai, Matta. Earlier, his brother Ahmad Khan was elected UC Nazim in the 2001 local body elections.

Khan has an MSc degree in agriculture; his family has vast farm lands and is considered one of the influential landlords of Matta.

The QWP stalwart is the party’s general secretary. He belongs to Chakdara in Malakand, and was sworn in as Minister for Labour and Industry.

Tanoli was elected to the K-P Assembly for the first time on a QWP ticket. Hailing from Mansehra, he is a businessman engaged in transport and timber sectors. As far as his political background is concerned, Tanoli is a newcomer. He has been given the forestry portfolio in the new cabinet.

Known as ‘little Imran’ in PTI circles because of his resemblance to the party’s chief, Atif has been allotted the elementary education portfolio. He is the regional president of PTI and has been elected as an MPA from PK-30 (Mardan-VIII) for the first time. He has an MBA degree and also owns a pharmaceutical company.

Previously holding the position of health minister in the Muttahida Majlis-e-Amal (MMA) government on a JI ticket, Inayatullah has now been sworn in as minister for local government in the newly formed cabinet. An active political worker, he comes from Upper Dir.