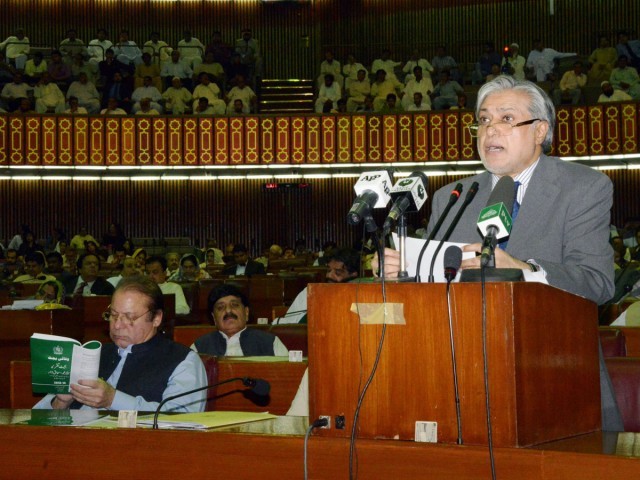 Perhaps the most surprising aspect of Dar’s speech was what he did not do: lay out the new administration’s comprehensive energy plan. PHOTO: AFP

He talked about self-reliance and economic growth, but the Rs3.6 trillion federal budget unveiled by Finance Minister Ishaq Dar on Wednesday clearly had one important audience in mind: the International Monetary Fund.

Despite slow economic growth, the Nawaz administration announced austerity measures and managed to avoid populist measures. The total size of the federal budget barely went up, with the total increase in federal outlays coming to a meagre Rs21 billion, or just 0.6% greater than the fiscal year ending June 30, 2013. The projected budget deficit for fiscal 2014 comes to about Rs1.6 trillion, or about 6.3% of the size of the economy, lower than fiscal 2013’s astronomical deficit of 8.8% of gross domestic product.

Some analysts suggest that the tone of the budget is clearly geared towards a re-entry into an IMF bailout programme. For instance, the total amount of fiscal adjustments in the budget came to Rs655 billion, or about 2.5% of GDP, higher than the 2% of GDP that the IMF had mentioned as a target during its preliminary talks with the government last year. A major cut came in the form of lower allocations for power subsidies, another pet peeve of the IMF.

And at least part of the massive Rs2 trillion deficit was induced by the incoming Nawaz administration, which decided to pay off Rs370 billion of the Rs500 billion circular debt bill within the outgoing fiscal year, taking the budget deficit for fiscal 2013 about 1.3% of GDP higher than it would otherwise have been. Another Rs160 billion have been allocated to fiscal 2014’s budget to tackle the remainder of the circular debt. This appears to be part of the government’s pledge, announced by Dar, to eliminate the energy sector’s circular debt within 60 days.

The austerity measures are likely to be painful, a fact that Dar alluded to when he quoted Muhammad Ali Jinnah in asking the nation to be prepared for sacrifices. Salaries of government employees were left unchanged, though pensions of retired civil servants went up by 10%. And the government did not announce any new public-sector jobs either.

Yet despite the austerity measures, the government is expected to borrow an astonishing Rs975 billion from the banking sector, about Rs169 billion from foreign lenders, and still have hundreds of billions of rupees to finance through various fixed-income markets, like the National Savings Scheme. Dar’s pledge to create the fiscal space for the private sector to borrow from the banking system, therefore, is likely to remain elusive over the coming year.

On the revenue side, the government decided to increase the tax collection target to Rs2,475 billion, an increase of over Rs400 billion over the previous year’s targets.

On the expenditure side, the single biggest chunk from the federal budget will once again be taken by the interest on the national debt, expected to clock in at Rs1.154 trillion, or just under a third of the budget. Defence spending is expected to reach as much as 28.2% of the budget and may well cross Rs1 trillion for the first time in history. Running the civilian side of the federal government is expected to cost Rs275 billion, the development budget has been allocated Rs540 billion and pensions, civilian and military, are expected to cost Rs171 billion.

Unlike the indignities that his predecessor, Abdul Hafeez Shaikh, had to endure, Dar was able to deliver his speech interrupted only by the occasional desk-thumping applause from the treasury benches. The only moment of rancour came when he tried to take credit for starting the Benazir Income Support Programme and announced its name change by referring to it only by its new name: the Income Support Fund. This was greeted by protests from parliamentarians from the Pakistan Peoples Party, which takes credit for starting the popular programme.

Dar announced that recipients of the programme would see their monthly allowance increased by 20% to Rs1,200 per month. The total amount allocated for the programme is Rs75 billion. The new finance minister criticised his predecessors for running the country “on auto-pilot” and claimed that the PML-N government would focus on trying to revive economic growth, through a six-point agenda based on economic liberalisation and self-reliance.

Perhaps the most surprising aspect of Dar’s speech was what he did not do: lay out the new administration’s comprehensive energy plan. Most analysts had been expecting this in the budget speech, and energy stocks on the Karachi Stock Exchange skyrocketed in anticipation.

Instead, Dar highlighted the government’s determination to undertake new power projects and cut back on subsidies, without providing specifics of a structural reform agenda, which he said Prime Minister Nawaz Sharif would unveil in the coming days. For his part, the prime minister quietly sat beside Dar throughout the speech and kept taking notes.

In keeping with the PML-N’s penchant for large infrastructure projects, Dar also announced that the government would be completing work on new highways, like the M9 that would link Hyderabad and Karachi, and the M4, which would link Faisalabad and Multan. He also announced a plan to connect the port of Gwadar with the northern border with China.

The one structural reform the minister announced was one that had already been announced before: the government’s intention to hire professional management teams for state-owned enterprises and put in plan independent boards with the authority to hire and fire top management in preparation for privatising many of them.

It was also announced that Pakistan Railways would be converted from a government department into a corporation, with the view of creating partnerships with the private sector as a means of reviving the moribund national carrier.

Defence budget hiked by 15 per cent