It is not that Pakist­an does not have laws agains­t child labour, the proble­m is of implem­entati­on and enforc­ement.
By Editorial
Published: June 13, 2013
Tweet Email 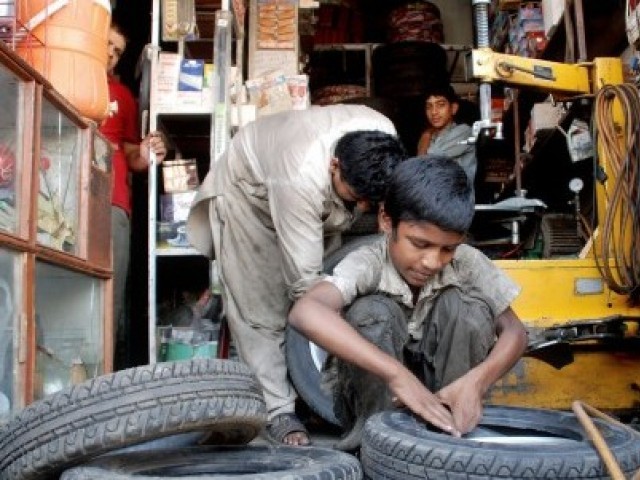 Unless there is a major crackdown by the government, the courts and NGOs against child labour on those violating child rights, it will be an extremely tricky task to eliminate child labour in Pakistan. PHOTO: SHAHBAZ MALIK

June 12 marked World Day Against Child Labour. Pakistan is one of the several countries that urgently need to take notice of this day. Protection against child labour is difficult to attain due to weak enforcement of laws. In addition, there also seems to be an utter lack of concern by the authorities whose responsibility it is to ensure that child rights are protected. This lack of concern is highlighted by the mysterious murder of Iqbal Masih, as reported in 1995, after he became an international symbol of abusive child labour, breaking away from the carpet industry at the burgeoning age of just 10. At an age when children should be learning basic math in school, they are instead learning how to be clever in convincing customers to buy their products and learning how to negotiate prices.

It is not that Pakistan does not have laws against child labour. It is, again, a problem of implementation and enforcement. We have several laws in place such as the Factories Act of 1934, which prohibits any child younger than 14 to work in a factory. Even if a child does take up employment after meeting the age requirement, he or she first has to be deemed physically fit for work: “A certifying surgeon shall, on the application of any child or adolescent who wishes to work in a factory, examine such person and ascertain his fitness for such work.” Furthermore, the Bonded Labour System Abolition Act says no children shall work between 7pm and 8am, yet we frequently see children chasing after cars urging people sitting inside to purchase flower bracelets and garlands, at all hours of the day.

The abuse of these laws is committed by people in several industries but also by those who are aware of the child labour factor in society. Frequently, pubescent or prepubescent girls are hired by adults as nannies to watch after infants and toddlers. Unless there is a major crackdown by the government, the courts and NGOs against child labour on those violating child rights, it will be an extremely tricky task to eliminate child labour in Pakistan. This countrywide crackdown needs to occur in the retail, wholesale, manufacturing and service industries where child labour is prevalent. Maybe then we can claim that World Day Against Child Labour is being paid heed to in Pakistan.