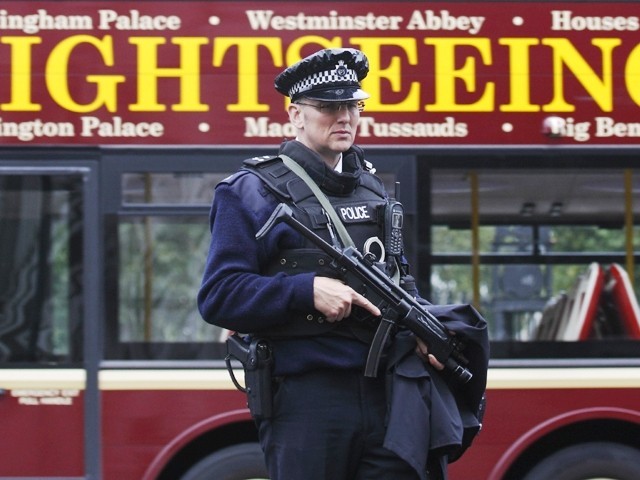 Security has been tightened in London after intelligence agencies uncovered a plot against European cities. PHOTO: REUTERS

“The threat is very real,” a security official based in Europe told AFP, after British and US media reported that militants were planning simultaneous strikes in London and in cities in France and Germany.

The official, speaking on condition of anonymity, confirmed that France and Britain had been targeted, explaining that orders had been given at the highest level of al Qaeda to punish Europe, and France in particular.

The BBC and Sky News said commando-style teams of militants planned to seize Western hostages and murder them in a manner similar to the attacks in Mumbai two years ago, but the source could not confirm this.

The official said a bomb was a more likely threat than a rampage such as that seen in the Indian city, where 10 gunmen killed 166 people and injured more than 300 in three luxury hotels, a railway station and restaurants.

US intelligence services learned of the threat through various sources, including the questioning of suspects from the Afghanistan-Pakistan border, which was then confirmed by other countries, the European official added.

US broadcasters ABC and CNN earlier reported that the source of the intelligence was a German suspect detained in Afghanistan.

In Washington, a US official told AFP the threat “was credible” but it was not clear when or where it meant to be launched, and it could take place outside France, Britain and Germany.

ABC reported that the United States was also a possible target and said President Barack Obama had been briefed.

“The threat is, at this point, credible but not specific,” said the US official, who asked to remain anonymous.

The official added: “And while no one should dismiss the prospect of a Mumbai-style operation, it’s entirely conceivable that other modes of attack are in play.”

The BBC described the threat as “one of the most serious al Qaeda attack plans in recent years” and said it was inspired by the terror group’s fugitive leadership in Pakistan’s tribal areas.

Sky News and the Wall Street Journal said a recent surge in US drone attacks in Pakistan’s border areas was aimed at eliminating the plot’s leaders, and had killed some of them.

Pakistan, however, rejected the notion of a plot on its soil.

“We don’t have any credible information from sources that any such planning is taking place or terrorists are planning anything in North Waziristan,” military spokesman Major General Athar Abbas told AFP.

Britain’s Home Office refused to comment on the reports of a plot, but a spokeswoman said: “We know we face a real and serious threat from terrorism.”

She told AFP there was “no change at all” to the national threat level, which since January has been at “severe”, the second highest of five levels, meaning a terror attack is highly likely.

The German government meanwhile said it was aware of al Qaeda’s “long-term” aim to attack Western targets, but it had not changed its security assessment.

“At the moment there are no concrete indications of any imminent attacks on Germany resulting from this,” an interior ministry statement said.

France has been on a heightened state of alert amid warnings of an imminent attack, but a source with links to the intelligence service said these warnings were not linked to the newly reported plot.

French officials also said Wednesday they had no new information on a specific threat, although government sources last week said US intelligence had warned of jihadi cells moving back to Europe from Pakistan.