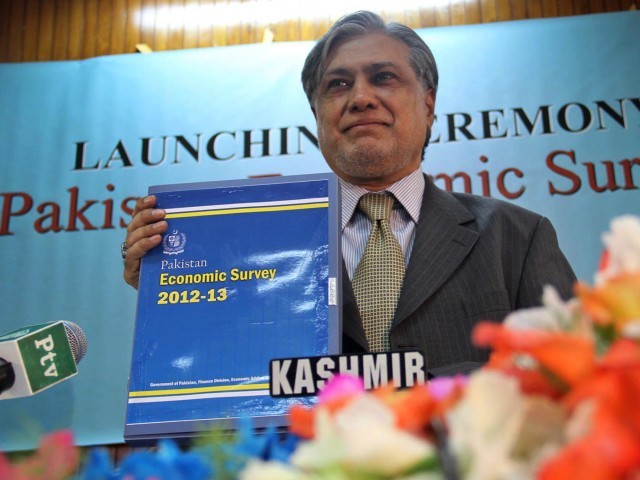 According to sources officials from the US Embassy in Islamabad approached the finance minister, requesting him to exclude the ‘War on Terrorism’ chapter from the Survey. PHOTO: MOHAMMAD JAVAID/EXPRESS

The colossal financial losses suffered by Pakistan because of the war on terror will officially remain classified, as Finance Minister Ishaq Dar decided to exclude the chapter carrying details of the losses from the Economic Survey of Pakistan.

While launching the Survey for fiscal 2012-13, Dar claimed the figures that were worked out by the ministry of finance were not credible and to save Pakistan from potential embarrassment by providing false information, he decided to exclude the chapter on the war on terrorism at the eleventh hour.

“Initially I was informed that the losses were between $80 billion and $100 billion but later on the officials came up with a figure of $125 billion, which appeared unrealistic to me,” said Dar. He said the ministry also added the cost of opportunity due to the war in the actual losses, but the officials “could not convince me about this figure”.

The figures were compiled by an inter-ministerial committee of the ministries of foreign affairs, finance, interior, commerce and representatives of Balochistan and Khyber-Pakhtunkhwa – the worst hit provinces by Pakistan’s alliance with the US in the war.

On the basis of the committee’s working, the losses had been worked out to $92 billion precisely till fiscal year 2012-13, sources added. They said Dar had approved this figure following which the Economic Survey was sent for printing on Monday.

Later on, officials from the US Embassy in Islamabad approached the finance minister, requesting him to exclude the ‘War on Terrorism’ chapter from the Survey, sources claimed.

The previous government of the Pakistan Peoples Party had decided to exclude the chapter from the Economic Survey of Pakistan for fiscal 2011-12. However, the ministry of finance decided to add this chapter again until the abrupt U-turn.

Up to 2010-11, Pakistan officially suffered $68 billion in losses and fatalities of more than 35,000 citizens and 3,500 security personnel. The 2010-11 losses were the highest in any given year since Pakistan became a front line state in the global war against terrorism.

On account of indirect losses, the previous surveys had stated, “The western countries including the United States continued to impose a travel ban on their citizens (investors, importers) to travel to Pakistan. This also affected Pakistan’s exports, prevented the inflows of foreign investment and affected the pace of the privatisation programme.

Analysis: Now for the hard part…