Former principal of St Joseph’s, Zinia Pinto, passes away at 83

Former principal of St Joseph’s, Zinia Pinto, passes away at 83 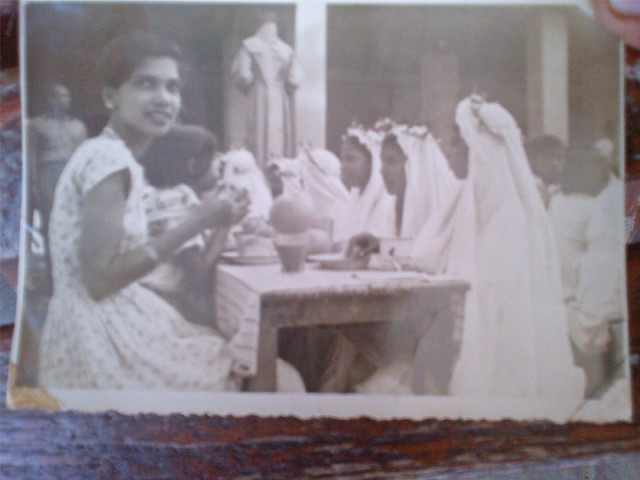 A photograph of Sr Zinia Pinto, who died on Tuesday, from when she joined St Joseph’s school in 1956. PHOTO: COURTESY: ST JOSEPH’S SCHOOL

KARACHI: Sister Zinia Pinto, who passed away at the age of 83 on Tuesday night, would have disapproved of any emotional outbursts over her death.

The former principal of St Joseph’s Convent High School and Mother Superior was legendary for her restraint, which she used as a tool for discipline. After break, for example, as the giddy teenaged girls in the brown and blue-checkered uniform lined up for assembly, Sr Zinia would quietly take her place at the head of the columns and start speaking so softly that everyone had to shut up to hear her speak. I don’t need to shout to be heard, she would say.

It was thus fitting that a quietly dignified notice was the only bearer of news of her death on Wednesday morning: “Your prayers are requested for the soul of Sister Zinia Pinto who passed away last night. School will remain closed on Wednesday and Thursday. The funeral service of Sr Zinia Pinto will be held on Thursday at 4pm at St Patrick’s Cathedral.”

If anything, the silence on the campus of the 151-year-old St Joseph’s Convent School in Saddar started by five Daughters of the Cross from Belgium in 1862, spoke volumes of the loss of one of its most inspiring figures.

Born on September 7, 1929 in Goa, Sr Zinia came from a family of 11 children. She was the ninth child. After studying up to high school in Goa, she pursued her Bachelor’s degree in philosophy from St Xavier’s College in Bombay and was trained as a teacher.

She taught for nearly a year in Bombay and for almost three years in Darjeeling district’s hill station, Kurseong, before migrating to Karachi in 1956. It was here that she was appointed a teacher at St Joseph’s Convent High School.

In 1958, she joined the convent and prepared to join the order in Belgium’s Liège. Upon her return to Karachi in 1960, she joined the University of Karachi and obtained a Master’s degree in psychology. She joined St Joseph’s as the principal in 1963 and held this office for almost 30 years.

Sr Margaret recalled that it was until the 1990s that the sisters had to adhere to strict dress codes. “When we were allowed to dress according to the customs of the country, Sr Zinia was the first to change her habits,” recalled Sr Margaret, adding that Sr Zinia was fond of traditional Punjabi dresses given her Goan-Punjabi background. “That’s how she was – a young-at-heart and go-ahead soul adopting new positive trends and things in life.”

Her colleagues remember her as a modern educationist who wanted to make use of all the new technology. “She was, in fact, the one who introduced computer education at the convent school, which was later followed by the rest of the institutions across the country,” recalled Sr Margaret.

Sr Angelina Francis, the present superior of the house, told The Express Tribune that she had the opportunity to spend around six years with Sr Zinia at a Catholic providence home located in DHA before the two moved to St Joseph’s. “As a psychologist, Sr Zinia could understand the needs of those children from broken families or of single parents and took an interest in providing them a homely environment,” she said.

Fauzia Fikree, who has been teaching at the school for nearly 46 years now, remembers her mentor fondly. Once when Fikree was going to the United States, Sr Zinia handed her an envelope and told her to open it in New York. “What I found was nothing except a hundred dollar bill,” said Fikree, smiling at the memory. “That’s how she showed how much she cared.”

Another teacher, Muna Kazi Pathan, also attributes her life’s lessons to Sr Zinia. “How I live and what my values are, are all I have learnt from her – she made us into complete human beings.”