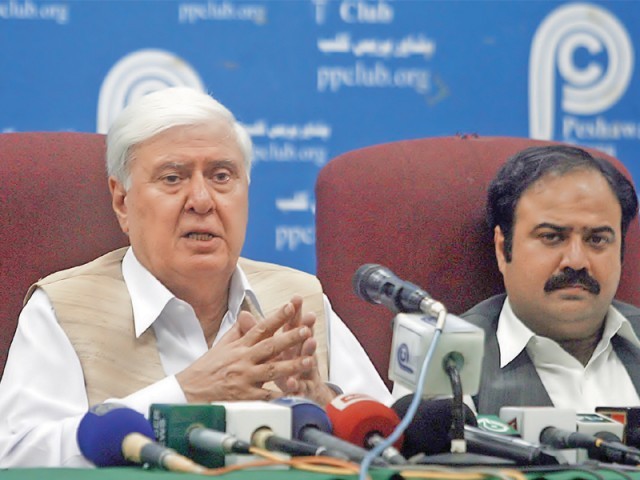 All stakeholders should be consulted before the government sits on a table with the Tehreek-e-Taliban Pakistan (TTP), said Chairman Qaumi Watan Party Aftab Ahmad Khan Sherpao at a news conference in the provincial capital on Sunday.

Sherpao, who took oath as National Assembly member on June 1, said that lasting peace can only be attained if a “joint framework” is evolved.

“QWP will support any such effort by federal and provincial government aiming to end terrorism and achieve sustainable peace in the region,” said Sherpao.

But his condition was that his party should be consulted.

The party leader’s statement regarding dialogue with the TTP comes only days after the militant group withdrew the talks offer following the death of its Deputy Chief Waliur Rehman. The TTP spokesman had “threatened to avenge the killing” of their deputy chief.

Lashing out at the previous Awami National Party-led K-P government for devising policies against the will and aspirations of Pakhtuns, he stressed that all parties, along with other relevant stakeholders, must be consulted before devising any policy for achieving peace and eradicating terrorism.

Sherpao also said that his party had substantial inputs to make in drone-related policy, had it been consulted.

“We will not support any step against the people of this region,” vowed Sherpao, adding that he and his party members will closely monitor all national level policies aimed at achieving peace in Pakhtun areas from now onwards.

Past rulers have broken all records of corruption, with the worst kind of mismanagement being witnessed in every government department in the province, said Sherpao.

He assured that the PTI-led coalition government of K-P would make all-out efforts to eradicate corruption and nepotism.

New enthusiasm and passion are necessary to ensure sustained peace in this region, he stressed.

QWP would support the privatisation of National Transmission Distribution Company and Pesco, said Sherpao, while expressing optimism that this measure will go a long way to tackle power crisis.

While setting up priorities for the development of underprivileged Pakhtun areas, QWP chairman said that his party had joined the Pakistan Tehreek-e-Insaf (PTI) led coalition government in KP only after they agreed with our election manifesto.

Highlighting challenges faced by the Pakhtuns, the QWP leader said that his party and its allies will struggle “to bring Pakhtuns at par,” and would make all-out efforts to rebuild damaged education and other infrastructure in the province.

Currently, the infrastructure of educational institutions in several parts the province stands destroyed by militants, owing to which scores of children have been deprived of education.

Sherpao urged the federal government and international community to play its role in rehabilitation and reconstruction efforts in K-P and Fata areas that had suffered damage in the war on terror.

Keeping in view the significance of the local bodies system, Sherpao said that local bodies’ polls would be held in the province. He said that the PTI coalition government will ensure that power shifts from top to bottom through this system, he added.