India court to rule on Babri mosque row on Thursday

India court to rule on Babri mosque row on Thursday

The verdic­t will add to the securi­ty worrie­s of the govern­ment which is alread­y busy with the Common­wealth Games.
By Reuters
Published: September 28, 2010
Tweet Email 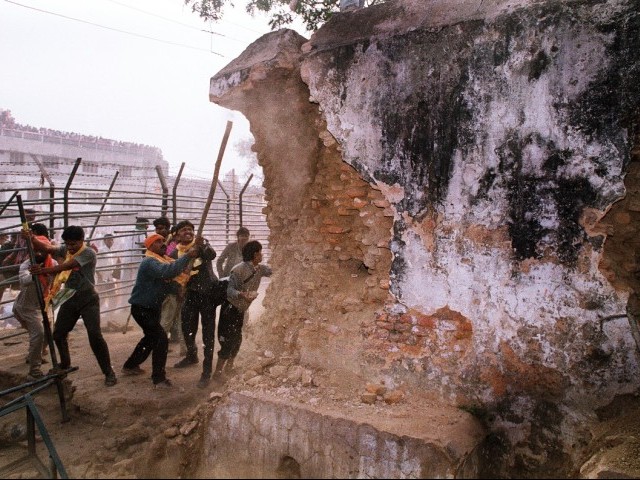 In this December 6, 1992 photograph, Indian Hindu fundamentalists attack the wall of the 16th century Babri Masjid Mosque with iron rods at a disputed holy site in the city of Ayodhya. PHOTO: AFP

LUCKNOW: An Indian court will rule on Thursday whether Hindus or Muslims own land around a demolished mosque in northern India, a judgment haunted by memories of 1992 riots that killed some 2,000 people.

Those riots were some of the country’s worst religious violence since Partition in 1947 and a verdict on the case may spark more disturbances between India’s majority Hindus and minority Muslims.

The verdict will add to the security worries of the government, which already has its hands full dealing with the preparations for the Commonwealth Games that are bedeviled by concerns over filthy accommodation and health and security.

The case over the 16th century Babri mosque in northern Uttar Pradesh state’s Ayodhya town is one of the biggest security challenges in India this year, along with a Maoist insurgency, Prime Minister Manmohan Singh has said.

‘The verdict will be announced on 30th (September) at 3:30p.m. (1000 GMT),’ said Subodh Sahay, registrar of the court in the northern state of Uttar Pradesh.

The verdict date was announced after India’s Supreme Court on Tuesday cleared the way for a court in Uttar Pradesh to decide on the ownership of the Babri Mosque. The mosque was razed in 1992 by Hindu mobs, sparking rioting between Hindus and Muslims that killed some 2,000 people.

Hindus and Muslims have quarrelled for more than a century over the history of the Babri mosque.

Hindus claim that the mosque stands on the birthplace of their god-king Rama, and was built after the destruction of a Hindu temple in the 16th century.

The dispute flared up in 1992 after a Hindu mob destroyed the mosque and nearly 2,000 were killed in rioting between Hindus and Muslims across the country.

The verdict on ownership of the religious site was to have come on Sept. 24 from the lower court in Uttar Pradesh state, but the top court suspended that imminent verdict last week, responding to arguments that a chance should be given to reconciliation in the 60-year-old case.

Lawyers of both sides in the case, Hindu and Muslim litigants, welcomed the Supreme Court decision, saying a verdict in the case could not be put off indefinitely as the chances of a reconciliation after years of litigation were slim.