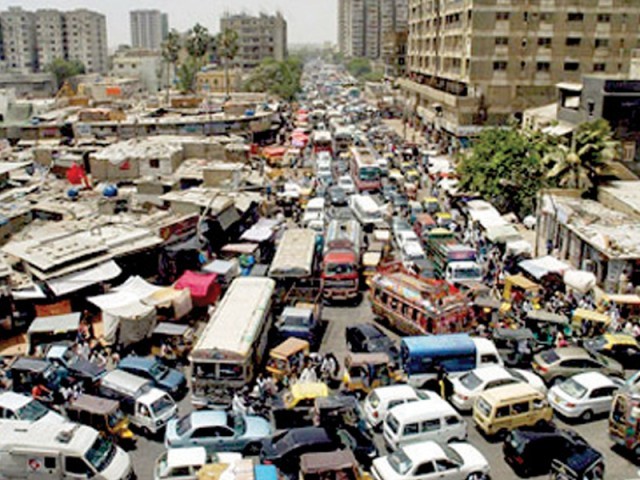 Traffic jams are a regular sight on the busy business centres in Saddar. PHOTO: FILE

KARACHI: From clothes to cell phones and fruits to televisions, you name it and Saddar has it. But one thing that is always in short supply here and only a lucky few can get their hands on it is –  parking space.

What makes it all the more surprising is the fact that Saddar has Pakistan’s biggest parking plaza yet it is plagued by chronic traffic gridlocks day in and day out. Lying in the very heart of the city, Saddar houses several government offices, business centres, the Sindh High Court, Chief Minister House, Governor House, prestigious schools and colleges and is frequented by everyone from VIPs to the common man. But despite the presence of high profile offices and business centres, the town lacks the capacity to accommodate the sea of cars that flood its narrow lanes.

It is primarily due to the mismanagement of the bureaucracy that the multi-million rupee parking plaza is lying idle while motorists park as they please. The plaza, which was inaugurated by the Sindh Governor Dr Ishratul Ebad Khan many years ago, could have eased traffic congestion if not completely solved it as it was built near the extremely busy Empress Market.

Speaking on condition of anonymity, a Karachi Metropolitan Corporation employee at the plaza said that 700 cars and 500 motorcycles can be parked at the plaza at any given time but the daily traffic rarely crossed 30 cars and 15 motorcycles. The official said that the plaza remained underutilised because people find it convenient to park near where they want to shop.

Azhar Ali, a traffic police constable stationed at the Regal Chowk signal, corroborated his claim and said that it becomes very difficult to ensure smooth flow during rush hours because people park their vehicles in front of the markets despite it being a tow away zone.

“Our lifters take away all cars and motorcycles from the no-parking zone and charge Rs200 each as lifting charges besides the challan amount.”

The city is no stranger to mafias. And it appears that a ‘parking mafia’ has emerged to add to the already thriving bhatta and land mafia. A police official at the Artillery Maidan police station, who did not want to be named, said that except for the parking plaza, the entire parking space is illegally operated by either political groups or the business community.

“Around three months back a SHO tried to clear the Empress Market of encroachments and illegal parking spots but he faced immense pressure from the higher authorities and political groups,” he recalled.

Muhammad Irfan, a shopkeeper, admitted that they operated the parking slots for want of other parking options in the area. “Thousands of vehicles are parked here daily and the parking plaza, which is not so near, has a capacity of only 1,200 vehicles. It leaves us with very little options. It is the responsibility of the government to build more parking facilities in the area.”

The provincial caretaker transport minister, Sardar Khan Ghoto, was not available for comments. A transport department official said, however, that the lack of parking space has become a huge headache for them and while they were mulling over different projects in other parts of the city, it seems unlikely that a parking plaza could be constructed in a densely populated area such as Saddar with a capacity of handling 50,000 vehicles at a time.