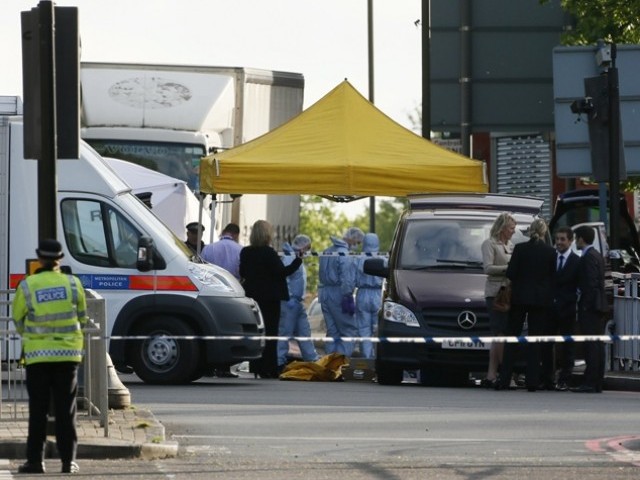 Police forensics officers investigate a crime scene where one man was killed in Woolwich, southeast London May 22, 2013. PHOTO: AFP

LONDON: A man believed to be a serving British soldier was brutally murdered in broad daylight near a London barracks on Wednesday in what Prime Minister David Cameron said appeared to be a terrorist attack.

Cameron called the attack “appalling” and said, “There are strong indications that it is a terrorist incident.”

One broadcaster showed footage of one of the men at the scene carrying a blood-covered knife and meat cleaver saying to the camera: “We swear… we will never stop fighting you.”

The black man, dressed in a grey hooded jacket and black woolly hat, made a number of political statements to bystanders.

“We must fight them as they fight us. An eye for an eye, a tooth for a tooth,” he says in a London accent in the video.

He adds: “I apologise that women have had to witness this today, but in our land our women have to see the same. You people will never be safe. Remove your government, they don’t care about you.”

The attack took place in broad daylight around 200 metres from the Royal Artillery Barracks in Woolwich, southeast London, about 15km east of 10 Downing Street.

Cameron, who was to return early from talks with French President Francois Hollande in Paris to deal with the aftermath, called the attack “truly shocking”.

Hollande said at a press conference that the victim was a soldier, but Cameron gave no confirmation.

A local member of parliament said he believed the dead man was a soldier.

Cameron said, “We’ve had this sort of attack before in our country and we never buckle in the face of them.”

“It has been confirmed to me that a man has been brutally murdered this afternoon in southeast London,” she said.

“Two other men were shot by armed police and they are currently receiving treatment for their injuries. This is a sickening and barbaric attack.”

“A number of weapons were reportedly being used in the attack, and this included reports of a firearm,” said police commander Simon Letchford.

Local police officers, then firearms officers arrived on the scene where they found a man who was later pronounced dead.

“Two men, who we believe from early reports to have been carrying weapons, were shot by police. They were taken to separate London hospitals, they are receiving treatment for their injuries,” Letchford said.

He said there would be a heightened police presence in the area and urged locals to remain calm.

A white and blue police evidence tent was visible in the street and police tape sealed off the scene. People in forensic suits were also seen.

Eyewitness pictures showed an air ambulance landing in the road and three bodies lying on the ground with dozens of onlookers observing the scene after the police arrived.

Nick Raynsford, the member of parliament for Woolwich and Greenwich, said his understanding after speaking to police and army officers was that the dead man was a soldier.

“We think a serving soldier was the victim,” he said.

“A number of weapons have been seized. They include a gun, various knives, and a machete, apparently.

“The police clearly had to take action in order to try and arrest these individuals.”

A Buckingham Palace spokesperson said Queen Elizabeth II — who is due to visit the barracks later this month — was being kept updated.

“The queen is of course concerned by the report of an attack in Woolwich,” he said.

“Her Majesty is being kept informed.”

The spokesperson confirmed the monarch would carry out a planned visit to the King’s Troop Royal Horse Artillery at the barracks on May 31.

US acknowledges their drones killed American in Pakistan