Birth anniversary celebrations: ‘Manto was much more than a controversial writer’

Birth anniversary celebrations: ‘Manto was much more than a controversial writer’ 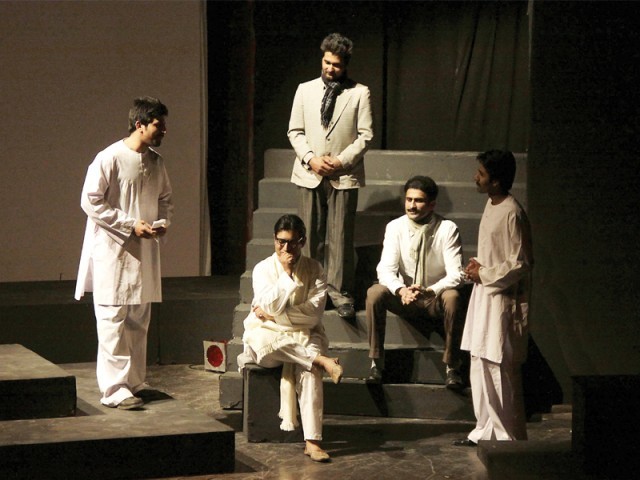 “In early ‘50s Manto predicted a close alliance between America and the Pakistani mullahs to defeat the Soviets,” said Shahid Nadeem, the writer of the play Kaun Hai Yeh Gustakh, staged by the Ajoka Theatre Group at the Alhamra Arts Council here on Friday.

He said the play shows Saadat Hassan Manto as a visionary. “I have always believed that Manto was much more than a controversial writer who wrote about sex and prostitutes,” he said.

The play was directed by Madeeha Gauhar and marks the end of Ajoka Theatre’s celebrations of Saadat Hasan Manto’s 101st birth anniversary. The title refers to a poem by Majeed Amjad.

“Kaun Hai Yeh Gustakh was needed because of the attempts by the Pakistani state and conservative elements to ‘sanitise’ Manto,” Gauhar told The Express Tribune.

She said, “It is a tribute to the gustakh [impertinent] writer who would have declined the Nishaan-i-Pakistan awarded to him by the hypocritical establishment after his death.”

The play depicts the hostile reception Manto got from a conservative establishment and a rigid left following his migration to Pakistan. It uses some of Manto’s short stories including Khuda ki kasam, Khol Do, Licence, Letters to Uncle Sam, Thanda Gosht and Toba Tek Singh, to depict the writer’s emotional and creative process.Naseem Abbas, who played Manto, said he was honoured. “It is one of the most difficult characters I have performed,” he said.

Uzma Hassan, the female lead who performed three roles in the play including that of Manto’s alternate ego, said she had joined Ajoka Theatre in November last year.

She said, “The play helped me better understand Manto.”

“Manto beautifully depicted the problems faced by our society in his letters,” said Kamran Mujahid, a senior TV and stage artist, who played Shayam.

“We have staged this play in India and in Peshawar as well. We will continue to play our part in helping the younger generation know Manto better,” he said.