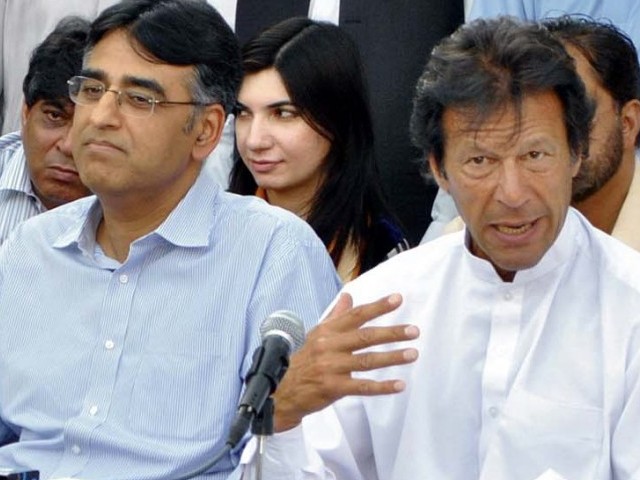 Senior leaders of the Pakistan Tehreek-e-Insaf (PTI) denied reports that the PTI would hand over the Khyber-Pakhtunkhwa education ministry to its new coalition partner, the Jamaat-e-Islami (JI), though they confirmed that the JI would be getting the provincial finance ministry.

“There is no ideological difference between the PTI and the JI as far as the finance ministry is concerned,” Asad Umar, a senior vice president of the PTI, told The Express Tribune. “When it comes to matters relating to taxation, the PTI and JI see eye to eye.”

Umar, considered to be the party’s main leader on economic policy, confirmed reports that JI’s Sirajul Haq, elected to the K-P Assembly from Lower Dir, would be the provincial finance minister. It is not yet known who the PTI will be nominating to lead the education ministry, though the party leadership has made it clear that it will be one of their own.

The rumour that JI had been given three ministries – finance, education, and zakat – in exchange for joining the coalition with PTI caused a stir among the party’s supporters, who expressed their disappointment on social media. Particularly distressing to most PTI supporters was the fact that their party’s education plan was among the highlights of the policy agenda on the strength of which the PTI ran its election campaign.

Sources familiar with the PTI leadership’s deliberations suggested that the party’s top brass acknowledged those concerns and were keen to run the province’s education policy according to their own policy agenda. And even on the question of the finance ministry, the PTI appears to be taking measures to ensure that its economic platform gets implemented.

According to sources familiar with the matter, while Sirajul Haq will be the provincial finance minister, he will not be in charge of the planning and development department, which the PTI plans to keep for itself. The planning and development department in provincial governments is an absolutely critical one, since it is the starting point from which the implementation of all policy reforms must originate.

The K-P government consists of 30 departments, but under Article 130 (6) of the constitution, can only have a maximum of 15 cabinet members. Ministers, therefore, will be running more than one department. The education minister, for instance, will be in charge of two separate departments, that of higher education and elementary and secondary education.

After the 18th Amendment to the constitution, and the passage of the 7th National Finance Commission Award, provincial governments in Pakistan have been given far more autonomy than at any point in the country’s history. The PTI leadership views its government in K-P as an opportunity to compete on governance quality with its arch-rival, the Pakistan Muslim League-Nawaz. The provincial government in Peshawar is viewed by the PTI as a stepping stone for gaining the trust of a broader swathe of voters nationwide as competent managers of economic and social policy.

Sources familiar with the matter say that the PTI leadership plans to use “party resources” to help shape the provincial government’s policies, a reference to PTI’s embryonic policy think tank which has helped develop the party’s economic platform.

Yet in order to compete on policy, the PTI must first master coalition politics. It must keep its coalition partners satisfied while retaining the ability to shape the direction of the government’s policy agenda. The initial announcement – made by a JI spokesperson – that the PTI had given the crucial education ministry to a coalition partner represents a stumble, though one from which the party appears to have recovered, at least for now.