Art exhibition: US and Pak artists infuse their paintings with each other’s dreams

Art exhibition: US and Pak artists infuse their paintings with each other’s dreams 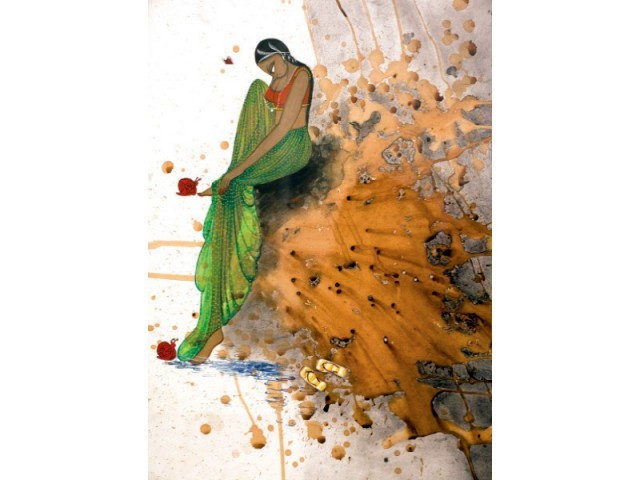 Two of the pieces at the exhibition. PHOTO: MYRA IQBAL/ EXPRESS

Whimsical yet riveting, infusing the works of East meets West, the latest exhibition to open at Satrang Gallery, “What remains are children’s lullabies” features the works of six artists who manage to transcend boundaries and speak through the language of art alone.

American artists Chloe Boden and Marian Barber add their unique own dimension and colour to the works of Saad Ahmed, Sakina Akber, Samreen Asif and Sundas Rana. Rana who is also the curator of the show explained the collaboration is about meshing each individual’s fantasies.

“It’s not just about sharing art pieces but also about sharing each other’s dreams, emotions and realities, Rana stated. Each artist creates a personal narrative while plotting around magical and supernatural fantasies simultaneously merging and tracing the realities of their fellow artists,” she added.

The artists managed to collaborate by mailing their work back and forth across continents. Samreen’s preservation of traditional miniature imagery and Sakina’s drawings inspired by her surroundings and her relationship with people compliment and contrast Marian’s work who builds her personal mythologies based on the images she has been observing while she grew up.

Chloe, Sundas and Saad strive to share thoughts on the longing for love, affection and identity. In the spirit of exchanging thoughts and space, these three developed a visual narrative based on their understanding of the prose and poems written by Sundas.

The poems and illustrations on “Red and White” and “I want, I want, I want” are symbolic of the human tendency to try to fill emotional and psychological gaps with physical objects and desires.

Each artist also contributes individually to the show creating a variety of more than 38 pieces for the viewer to reflect upon. Chloe depicts people’s need to gain acceptance and affection through their possessions and outward image as she uses watercolours to paint materialistic people collecting items and storing them away in makeshift beehives.

Saad with his powerful visuals showcases pixilated semi-nude and nude people “Most of the time we’re very much aware of what is right and what is wrong around us but there are certain acts that we unconsciously observe that tend to be very unusual. These acts we grow comfortable with so they no longer seem unusual to us,” he said.

Sakina with her images exuding childlike innocence as she plays with colours and narrates children’s dreams and its connection with Sufism.

At the inauguration, US Ambassador Richard Olson praised the collaborative work of US and Pakistani artists. “Building cultural ties creates mutual understanding and enhances productive dialogue.  It also enables inspiring collaboration, such as what we see here today in this exhibit,” he said.

The exhibition will continue till June 10.