Says she has come to save her husban­d’s party.
By Mureeb Mohmand
Published: May 14, 2013
Tweet Email 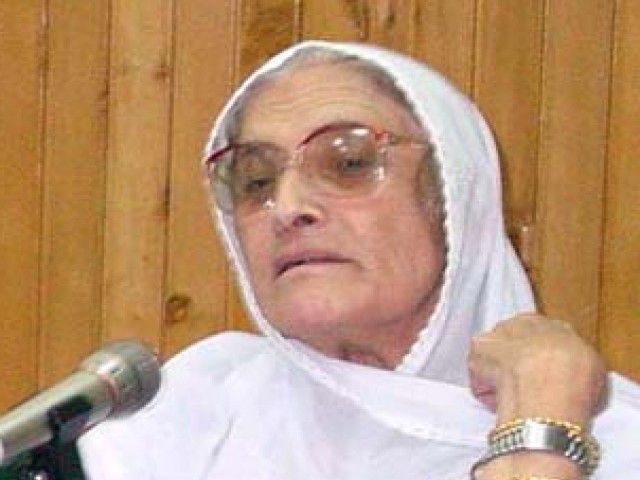 The Taliban should be invited to the negotiation table in order to restore peace in Khyber-Pakhtunkhwa, says Begum Naseem Wali Khan. PHOTO: EXPRESS

The first woman to be elected on a general seat from Khyber-Pakhtunkhwa (K-P) made no efforts to mince her words as she lashed out at her stepson while talking to journalists at her residence in Wali Bagh, Charsadda, claiming she has come to “save” her husband and Bacha Khan’s party.

Naseem blamed Asfandyar and Afrasiab Khattak for the ANP’s dismal performance in the general elections, claiming the latter was banned by Wali Khan who knew “he (Khattak) would destroy the party’s structure.”

“The time has now come to protect Abdul Ghaffar Khan’s party in the province,” said Naseem, indicating she will lead the party from its home turf, Wali Bagh, if the “wrongdoers are kicked out.”

Naseem claimed ANP had changed its manifesto and constitution for one man – Asfandyar Wali Khan – and added the ANP leader had spent nothing in the way of development work. In another attempt to draw attention to the party leadership’s inefficacy, Naseem said the Taliban should be invited to the negotiation table in order to restore peace in K-P.

Naseem said she was living in the province when Asfandyar’s ANP was in power, while the latter himself moved to Islamabad following a suicide attack on him in 2008.

Begum Naseem led the party – then known as the National Awami Party (NAP) – in the mid-70s when Wali Khan was imprisoned by Zulfikar Ali Bhutto. She was also an active partner of the Pakistan National Alliance (PNA) and was said to be among those, like Asghar Khan, who supported Zia-ul-Haq’s regime. Some even claimed Bacha Khan disliked her and that her presence was owed to her husband’s influence.

Once considered to be the most powerful woman in the ANP, Begum Naseem served as the party’s provincial president for a long time before she was asked to leave the party in 2007. Following a defeat in the 2002 elections by the alliance of religious parties under the banner of the Muttahida Majlis-e-Amal (MMA), Begum faced similar criticism over what she now blames Asfandyar for.

Following her ouster, Khattak was made the party’s provincial president and Begum Naseem reluctantly left the political stage.

When contacted, ANP’s provincial general secretary Arbab Tahir Khan snubbed Naseem’s criticism of Asfandyar and defended the party chief saying he was forced out of his hometown by a targeted attack which claimed the lives of four party workers.

He questioned how it was possible for Asfandyar to return to Charsadda, adding the party faced 31 attacks in the run-up to the elections. He stressed the party stood united under Asfandyar and neither the manifesto nor the constitution was changed to suit any individual.

The now and then of polling in the district