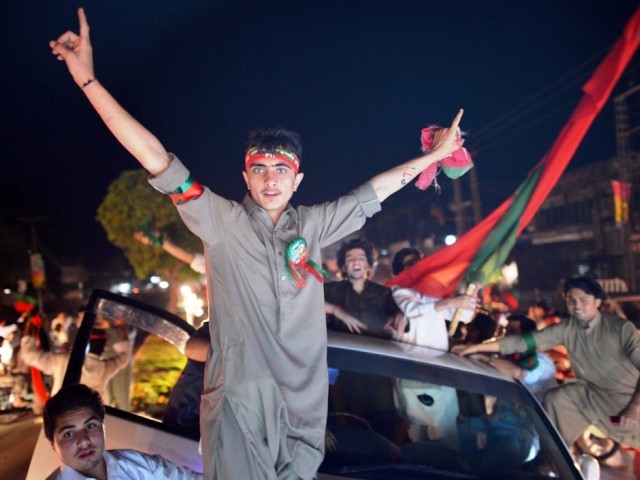 Supporters of Pakistani politician and former cricketer Imran Khan wave flags as they take part in a rally in Peshawar on May 11, 2013. PHOTO: AFP

Even in a normally fickle political climate, the general election held on Saturday brought surprising results:  the fortunes of religious and smaller political parties have changed,

In Khyber-Pakhtunkhwa (K-P), Awami National Party (ANP), a member of the ruling coalition in the centre for the past five years, is all but routed by the Pakistan Tehreek-e-Insaf (PTI).

Not only ANP but the Jamiat Ulema-e-Islam-Fazl (JUI-F) seem to be in troubled waters in the province, and are struggling to retain their position.

In the last election, the JUI-F won 7 National Assembly and 26 provincial assembly seats respectively. The Jamaat-e-Islami, which boycotted the 2008 polls, appears to have dented the JUI-F in the province.

The 2013 elections also proved to be fatal for the Pakistan Muslim League-Quaid (PML-Q).

Though Chaudhry Pervaiz Elahi won his home constituency Gujarat, other party candidates faced drubbing at the hands of the Pakistan Muslim League Nawaz (PML-N) in Punjab.

Among the small political parties, it appears that only Muttahida Qaumi Movement (MQM) will be in a position to retain their past position. In the 2008 elections, the MQM had 25 National Assembly seats while it also won 51 provincial assembly seats from Sindh. The figures include reserved seats for women.

The nationalist parties particularly Pakhtunkhwa Milli Awami Party (PkMAP) has made a comeback in Balochistan. The PkMAP chief Mehmood Khan Achakzai won his National Assembly seats from Quetta while his other party candidates are also expected to do well in the province.