Massive mismanagement: Voters forced to sweat it out in unending queues

Massive mismanagement: Voters forced to sweat it out in unending queues 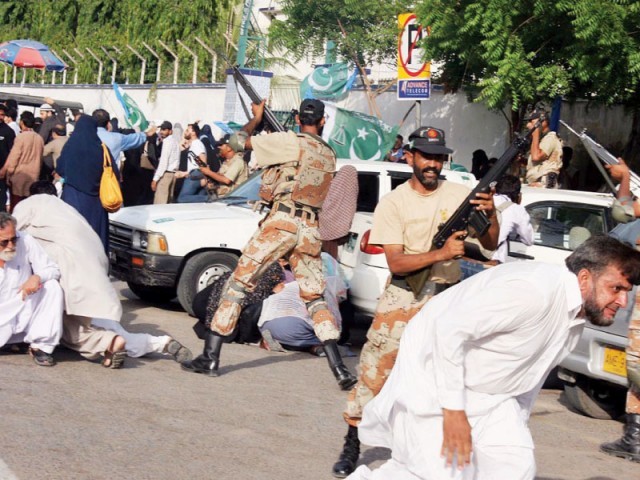 As hundreds of thousands of people left their homes to cast their votes, in what observers believe will be a record-breaking turnout, apart from a ‘credible’ voters’ list, Saturday’s general elections were no different from previous ones in terms of inadequate arrangements and rampant mismanagement.

Despite the tall claims made by the Election Commission of Pakistan (ECP), an overwhelming majority of polling staff complained of massive mismanagement on the commission’s part. In many instances, election material did not even reach polling stations till late Friday night or Saturday morning.

Painstakingly long queues, no parking space, lack of polling booths, faulty ballot papers, missing polling station staff and delay in the voting process were the common complaints that surfaced across the country as voting for the 2013 general elections kicked off.

While part of the reason for the long queues at polling stations was the unprecedented voter turnout, the issue mainly arose due to a shortage of polling booths.

It is yet to be verified if the ECP provided what it had claimed will be ‘magnetic ink’ for thumb impressions of voters because in most of polling stations, common stamp pads were being used.

Ballot papers in a number of constituencies were faulty, many voters complained. The names of candidates with their symbols were printed in parallel lines.

A common issue voters faced was if the ballot paper was folded while the stamp ink was wet, its ink impression would get implanted against some other candidate’s name — leading to cancellation of a large number of votes.

A female presiding officer at a polling station set up for women at Gordon College Rawalpindi said she had been waiting till three in the morning in order to collect the ballot papers and other related material for her polling station.

“I reached the polling station at four in the morning and set up the polling station,” she told The Express Tribune on condition of anonymity. “There was a real mess on the part of the election commission with regards to the distribution of polling material,” she complained.

“I did not even get time to have breakfast and there was no time to take breaks during the polling hours.”

Similar complaints were received in several other polling stations including NA-55 of Rawalpindi. Khurram Shehzad, presiding officer at the Government Degree College for Women at Mangtal claimed, “The college administration was not even informed that a polling station would be set up here.

“We reached at 3 am and found all doors closed and then broke the locks to set up the polling station.”

The presiding officer at the polling station on Murree Road near Liaqat Bagh had similar complaints.

Some polling stations had only two or three polling booths to serve voters numbering in the thousands – resulting in people waiting in queues for hours.

For the whole E-11 Sector’s over 6,000 female voters, only one polling station had been set up at a school in Golra. Hundreds of female voters continued to wait to cast their vote for over six hours.

There was no queue for senior or disabled citizens who were forced to either cut in lines ahead of people who had been waiting for hours or to wait in the heat like others, a presiding officer told The Express Tribune.