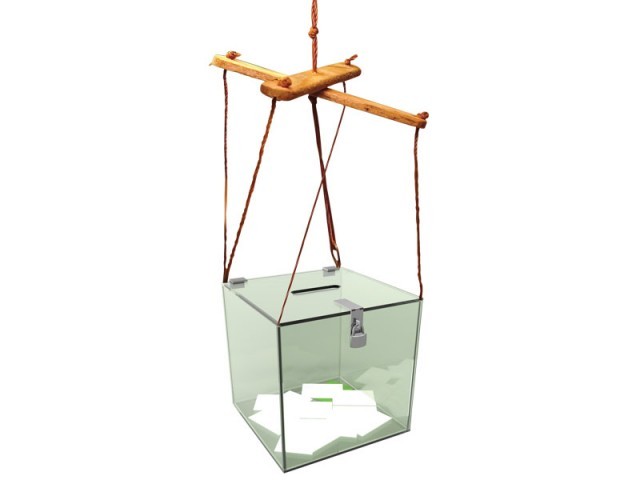 Electoral lists and ballot boxes were nowhere in sight, fake votes were registered, and some voters were purposely misguided by staff and volunteers – Saturday’s ‘free and fair’ polls were marred by allegations of rigging at various constituencies, especially in Karachi, prompting many parties to call for re-polling. Some parties even pulled out of the elections in Pakistan’s largest city.

“MQM activists were deliberately selected as polling staff so they would not turn up on time and create a shortage of staff,” he alleged. “Ballot boxes and stamps reached stations after three hours,” he said, a view echoed by many voters.

PTI liaison cell head Asad Umar said they had registered over 800 complaints with the Election Commission of Pakistan (ECP), a majority of which were regarding rigging by rival parties.

Leaders of the Pakistan Muslim League-Nawaz, Pakistan Peoples Party (PPP) and various religious leaders also condemned rigging in various parts of Pakistan.  PML-N spokesperson Senator Pervez Rasheed said the party was planning on compiling a list of complaints that have been filed with the ECP.

The Jamaat-e-Islami (JI), which announced a boycott of Karachi polls while voting was still ongoing, has called for a shutter-down strike on May 13 to protest the extensive rigging in Karachi and Hyderabad.

The Awami National Party (ANP) Sindh announced three days of mourning over the death of its activists in the Landhi blast but appealed to its activists to remain peaceful.

The MQM, which was accused of rigging by both PTI and JI, also expressed disappointment with the electoral process and decided to boycott the NA-248 Lyari seat.

Earlier in the day, MQM deputy convener Farooq Sattar held a press conference in which he said that rigging was being conducted at his constituency and demanded a re-polling in NA-250, since voting in several polling stations did not start until 3pm.

PTI and PML-N also alleged rigging in parts of the Punjab as well. Polling at NA-125 in Lahore was halted for three hours as PTI voters protested against PML-N candidate Khawaja Saad Rafique for allegedly interfering in the polling process.

Several people at the polling station in DHA said Rafique arrived with as many as 30 supporters and entered into a fight with the election staff at the women’s polling booth.

Meanwhile, Sher Ali Gorchani, a candidate of PML-N for PP 248, was arrested in a joint police and army operation after he tried to flee with ballot papers and ballot boxes. Stamps and 40 ballot papers were recovered as a result of the raid.

According to PTI voters in NA-48, Islamabad, some female supporters of PML-N attempted to physically block PTI voters from moving ahead in the queue.

Meanwhile, chief of the Jamhoori Watan Party (JWP) Talal Akbar Bugti announced a complete boycott of the election, terming it a fraud.

Talking to reporters, he said the elections were neither free nor fair and claimed that the winners were pre-decided.

“We had informed the chief election commissioner, chief justice of Pakistan and Balochistan chief secretary about the planned fraud during the elections,” Bugti said.

Meanwhile, BNP-Awami central secretary general and candidate for PB 42 and 43 Asad Baloch termed the polls in Panjgur a ‘joke’, and demanded a re-election.