Women, youth make themselves count as agents of change

Women, youth make themselves count as agents of change 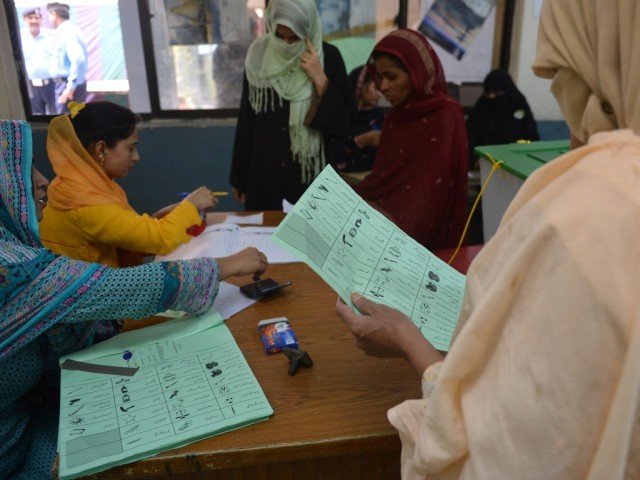 The electoral participation of women in the twin cities was historically unprecedented. PHOTO: AFP

For the twin cities’ residents, May 11 was the day they decided to make their votes count with unprecedented passion and a sense of responsibility. Presiding officers opened doors of polling stations to dozens of voters already queued up outside.

Young and old voters decided to hold themselves accountable for the country’s future and thronged polling stations in Rawalpindi and Islamabad, creating a democratic, festive atmosphere in the process.

“I have come here on my own to cast my vote and I have voted for Imran Khan. This country has seen enough during the last five years,” said 70-year-old Afzal Mehmood. He said he had asked his son to find his serial number in the voters’ list by texting on 8300. “It saved me time.”

Election Day unfolded slowly in Rawalpindi, with roads deserted and major markets closed in the early morning. But by mid-afternoon, voters had arrived to form long queues at the polling stations — the voter turnout was expected to be around 60 per cent.

The Pakistan Muslim League-Nawaz (PML-N) and Pakistan Tehreek-e-Insaf (PTI) captured the electorate’s attention in Rawalpindi and maintained a ubiquitous presence, with other political parties struggling to catch up. Party supporters manned election camps and took out rallies on major roads throughout the day. Except for convenience stores in small neighbourhoods, most shops and markets remained closed throughout the day.

On Murree Road, supporters of rivals PML-N and PTI danced in front of their election offices in Rehmanabad, NA-56, across the road from each other.

Before the elections became a reality, analysts had speculated on the participation of first-time voters in the polls. On Saturday, the youth did not disappoint and turned up to vote in unprecedented numbers. Although the youth was fragmented, the majority appeared to favour the Pakistan Tehreek-e-Insaf (PTI) regardless of the candidates the party had fielded.

“A mistake I make today will become a punishment for me for the next five years, so I’m voting for PTI,” said Waqas Ahmad, a student of Business Administration in Chaklala.

Maryam, 25, one of triplet sisters cast her vote at the Federal Government College for Women in F-7/4. The sisters said Khan had influenced them to fulfil their responsibility.

Other young voters were not sure who to vote for, but they turned up nevertheless. When Moniba Ali, a first-time voter and resident of sector F-7, entered the polling station she was determined not to vote for any of the major political parties.

“I stood there staring at all the party symbols and then a guitar caught my eye and I thought ‘hey, this must be a cool guy!’ and then thap! I stamped my vote for him,” Ali said. The candidate she voted for was Syed Zia Gillani, an independent who had withdrawn in favour of Jamaat-e-Islami’s Mian Aslam two days before the elections.”

The electoral participation of women in the twin cities was historically unprecedented.

Presiding Officer Khadijatul Kubra in Satellite Town was amazed at the turnout of women voters, which she said she had never witnessed during 30 years of election duty. By 1 pm, 789 women had cast their ballots at Kubra’s polling station — around 64 per cent of the registered 1239 women.

Mrs. Fayyaz, a resident of Arya Mohalla who wished to be identified by her married name only, who arrived at the Gordon College polling station of NA-55 , said, “We voted for (Imran) Khan sahib because we wanted to try a new political option.” We did not even care which politicians our men were voting for,” she added.

“I personally do not know Imran Khan but I’ve cast my vote for him because I want a new Pakistan,” said Mrs Akhtar, who came to cast her vote at the Islamabad Model School for Girls in Shahpur, in NA-49, with her daughter Fizza.

There was some support among the women for its arch-rival in Punjab, the PML-N. “It does not matter which candidate the PML-N fields from my constituency, our vote is always for the Tiger,” said Rakshanda Malik of Rawalpindi’s Kashmir-Chaman colony.