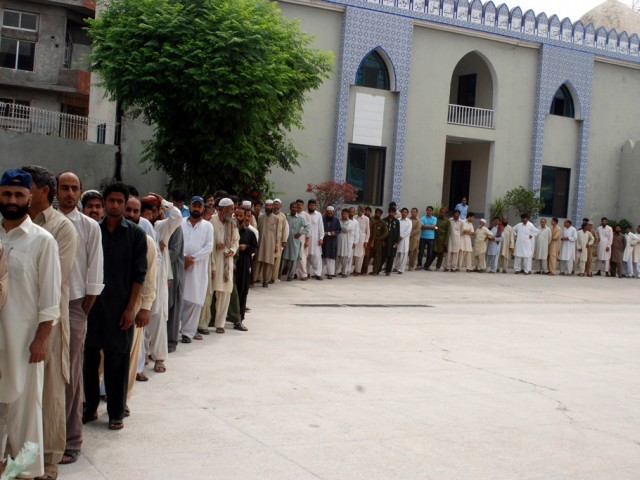 At some polling stations, the turnout was well over 60 per cent, with some reports listing turnout as high as 75%. PHOTO: Zafar Aslam

Polling started in twin cities of Islamabad and Rawalpindi smoothly amid fear and hope of perceived ‘change’. The process was marred by mismanagement and anomalies in the voters’ list and ballot papers.

The polling started at 8am in almost all polling stations, but a few saw voting delayed because of the late arrival of polling staff and representatives of different political parties.

Significantly higher turnout was witnessed during this election as compared to 2008. At some polling stations, the turnout was well over 60 per cent, with some reports listing turnout as high as 75%.

A large number of apolitical youth and women were seen participating in the election. Although many of the youth have not being registered in the voters list, they were still enthusiastically taking part in the process, helping voters find their names on the voter list and convincing people to come out of their houses to cast their vote.

Over one million voters will elect nine of their representatives and send them to the National Assemblies — seven from Rawalpindi and two from Islamabad. There were over 50 candidates, including a large number of independents, in the race for nine seats.

Surprisingly, the people of Islamabad are usually not early riser but today there was hustle and bustle around every public school and college.

Senior citizens, some in their 90’s, and disabled people also came to cast their votes. Ejaz Shah, 70, a trader came to cast his vote at polling station No 185, G-9/1. Dr Bahadur Ali, a retired government employee was also very optimistic about the outcome of the polls. He was against change at the barrel of a gun, and said “the ballot is the only way out of the crises our country is facing.”

In NA-48’s Islamabad Model College for Girls (IMCG) G-8/2, a big crowd was seen at 8am with scores of families lining up outside, but the female polling officer arrived 15 minutes late.

Khalida and her family had come from G-8. She was standing in line and still contemplating who to vote for. While she contemplated her vote, The Express Tribune met around 60 women in the long line who admitted to being first time first timers.

At Govt Shaukat Girls Elementary School in Saddar, Cantt SHO Murad Shah did not allow election observers or members of the media with ECP accreditation cards to enter the polling stations.

No adequate security arrangements were made in polling station 257 in NA-52 Rawalpindi, which was also declared ‘most sensitive’ by the ECP. Motorcycles and other vehicles were parked inside the polling station in clear violation of ECP rules, which said cars and motorcycles should be parked at least 400 metres away from polling areas.

At polling station number 220 Islamabad Model College for Girls (IMCG) Sector I-9/1, polling arrangements were inadequate. Only two polling booths had been set up for over1,500 registered male voters. The voting process was very slow, creating long queues. Only 200 votes were cast by 11:21am, and people began protesting against the slow process. The presiding officer said he had contacted the returning officer (RO) for additional booths, but the request was declined.

A similar situation was witnessed at female polling booths. Out of 1,300 registered female voters, only around 200 votes could be polled by 11:55am.

In NA-48 Islamabad-I, at 6:05am, a dozen of voters and Islamabad police personnel were at a male polling station set up at Government Model Primary School G-7/2.

At Dhoke Mangtal in Rawalpindi’s NA-55, severe mismanagement and lack of adequate security resulted in mayhem at the gate of the degree college, where seven polling stations were housed. Voters outside the college said they had been waiting in line for hours to cast their votes.

In NA-49 Margalla Town, polling had not started at Government Primary School till 8.30am. The polling staff turned out to be highly unorganised and was struggling to arrange serial numbers.

Neither the police officials checking people at the entrance, nor the polling personnel inside were able to check the use of chits, in fact, in F-7/4, some voters at a polling station were told by security staff to go back out and get chits if they wanted to vote.

One presiding officer admitted he was not aware of the new code and its chit ban.

In polling booth number 262, only PML-N polling agents were present and openly giving out party slips.

In NA-56 political parties have set up their election camps less than 100m away from polling stations numbers 95, and 99 at Govt Girls Degree College Rawalpindi and polling stations 102, and 104 Govt Johar Memorial High School in Dhoke Ilahi Bukhsh, a congested neighborhood of Rawalpindi. Sub Inspector Amjad Ali of Punjab Police said. “We cannot move the camps away because there is no space to put the camps anywhere else.”

There were reports of a lot of queue-cutting with little control, mostly by women. Reports were received of groups pretending to be chaperoning women on wheelchairs or the elderly, for whom there was a separate line.

On several occasions, the names and ranks of husbands and fathers were also heard being thrown around as a means to cut lines without security staff intervening. This left lines to move at snail’s pace and saw many women getting agitated. Surprisingly, things were far more organised at the far busier male polling stations.