Launch of platfo­rm for networ­king and exchan­ge of ideas.
By Myra Iqbal / Photo: Myra Iqbal
Published: May 9, 2013
Tweet Email 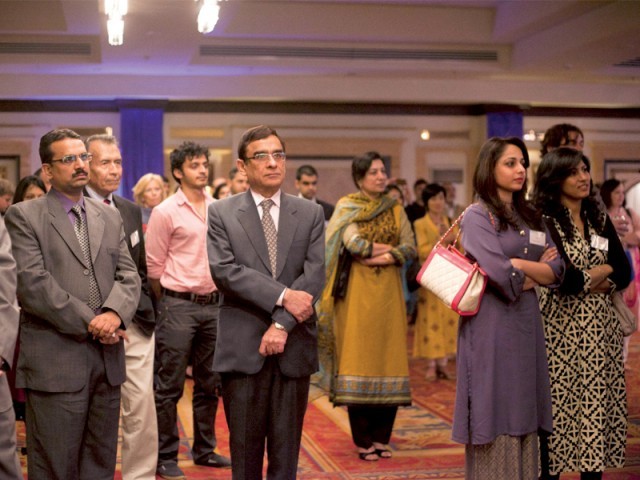 Sponsors and participants at the alumni meeting on Wednesday. PHOTO: MYRA IQBAL

ISLAMABAD: The Columbia Alumni Club of Pakistan was inaugurated at the Marriott Hotel in Islamabad on Tuesday evening. The club aims to marshal the talents of more than 200 alumni across the country in an exclusive platform to encourage involvement and discourse within various political, social and economic sectors.

The brainchild of alum and president of the club, Pervez Khan and fellow Columbia graduates, television anchor, Moeed Peerzada and consultant, Najma Minhas, the club is more than just a networking hive for successful ivy-league graduates working in diverging fields within the country.

“We want to develop a relationship with think-tanks in Pakistan and try to be part of public discourse in development, power, corporate and foreign policy issues,” he explained, adding that future plans for the club included book readings, movie screenings and speakers’ corners.

In his keynote address, Khan mentioned the Columbia alumni who hold key positions as judges, entrepreneurs, energy specialists and ambassadors in foreign countries, issuing that the club was not only a bridge between their country of origin and the country where they had attained a higher education, but a proactive podium to further strengthen the role of alumni working within Pakistan.

Around 35 alumni from Lahore, Peshawar, Faisalabad and Islamabad were present at the reception to exchange business cards and nostalgia over food and drink, in addition to foreign dignitaries, including the US Ambassador to Pakistan, Richard Olsen, Higher Education Commission (HEC) chairman Dr Javaid Leghari and Coca Cola Pakistan General Manager Rizwan Khan, who were the sponsors of the event.

Omar Jamil, who graduated from Columbia University with an MS in Journalism in 2004, shifted his focus to public relations two years ago when he started up a PR company based in Lahore. For Jamil, the club is an opportunity to network, an asset integral to his line of work.

Aki Yoshino, an alum from Japan, explained that having lived in the country for less than three months, the reception is an opportunity to engage with new people in a country otherwise entirely foreign and to instigate discussion in areas including hers, which is public health.

Located in New York City, the Columbia University is one of the most prestigious Ivy-league institutions in the United States and more than 43 Columbia Alumni have won Nobel prizes. According to Leghari, there are seven PhD students enrolled in Columbia University through HEC scholarships.