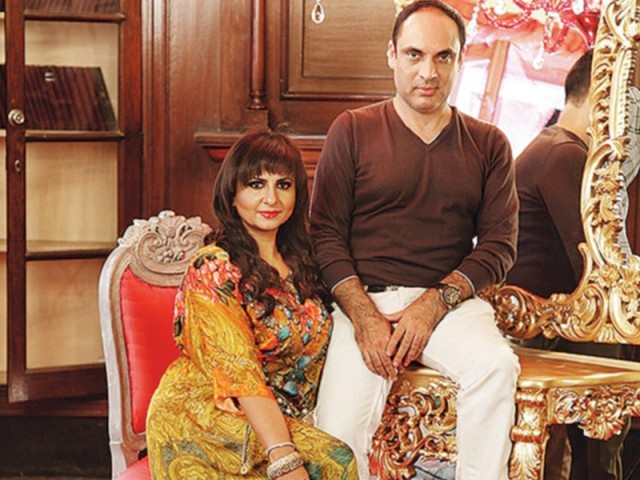 For over 15 years, Indian designer couple Anjalee and Arjun Kapoor have been working together to create designs for the international market.  While the duo designer might have bored the audience at Pantene Bridal Couture Week (PBCW) in Karachi with their overly embellished lehengas and cholis, they are known as one of the biggest designers in their fashion industry.

“We were invited to PBCW Karachi by Hum TV,” says Anjalee in an interview conducted after fashion week. “The Dubai connect did wonders for us; we have a huge clientele there who are Pakistani.”

Anjalee shares that her main Pakistani client is Sara Taseer, daughter of late Salman Taseer, and adds that the reason the duo came to Karachi was for brand exposure. At PBCW, the couple showcased their Mogul Opera collection, which consisted of heavily embellished bridal gowns and lehengas. From silks and jamawars to embroidery and large stones, the collection had it all.

“I took inspiration from the Renaissance era and added a Victorian touch with a glamorous feel to it,” says Anjalee. “I used jamawar that offers a sombre and sedated look — which transformed the look and gave it a complete twist.” She adds that they work to maintain the “wow factor” since September 2012, when the collection was first shown in Indian Bridal Couture Week held in Mumbai.

The Delhi-based designer duo boasts about their creative team being descendents of hand-embroiderers from the Mughal era. The best craftsmen they have are from Lucknow and Banaras. “They [craftsmen] have zardozi running through their veins,” she says.

With four stores operating worldwide, including one in New Delhi, Mumbai, Hong Kong and Dubai, their plan is to have a second outlet in New Delhi, making a total of five stores. After that, they want to expand by opening an outlet in Los Angeles.

While the brand is most admired for its glam work, Bollywood has never hired them for a film’s complete wardrobe. The duo has, however, designed dresses for Bollywood divas like Bipasha Basu, Madhuri Dixit, Lara Dutta, Katrina Kaif and Deepika Pudokone for red carpet events.

Inspired by the Pakistani cuts-and-styles, Anjalee feels it would be great to do something similar in her own style. “I would love to experiment with Pakistani silhouettes,” says Anjalee. “But the signature looks and fabrics need to remain the same. Experimentation in silhouettes should be altogether different.”

Anjalee specifies that they take bridal orders by appointments only. “These days, there are big, fat Indian weddings and names to reckon with. People have become social and now want to dress up; they also require customised outfits for each event,” says the designer. “As a brand, what is required is something new to toy with. We create a new look every single day of our lives, with a new design, so that freshness comes in our outfits.”

Brand Central, a new online store on the block