Christ­ians living in Joseph Colony to vote for PPP, PML-N, while those in Peshaw­ar to vote for religi­ous partie­s.
By AFP
Published: May 6, 2013
Tweet Email 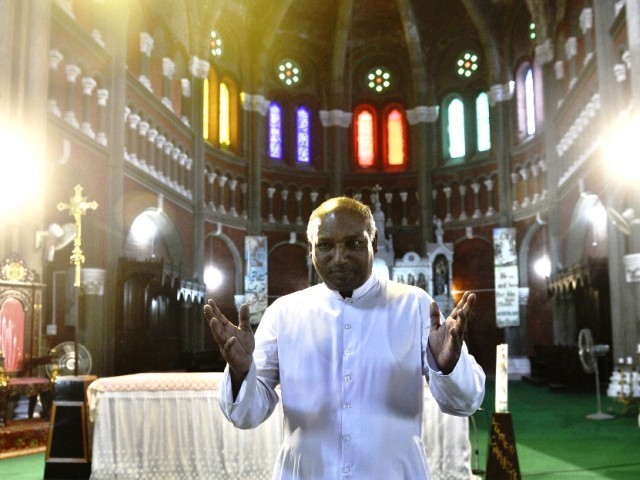 In this picture taken on May 3, 2013, Father Andrew Niasari gives interview to to AFP at the Sacred Heart of Jesus Cathedral in Lahore. PHOTO: AFP

LAHORE: Traumatised Christians in Joseph Colony, where angry mob torched more than 100 homes, say the country’s two largest parties offer the only hope of protection at this week’s general election.

Pakistan Muslim League-Nawaz (Nawaz), whose chief Nawaz Sharif is accused of being soft on the Taliban but tipped to win Saturday’s polls, and the main outgoing Pakistan People’s Party (PPP) both gave affected families $5,000 each in compensation.

PML-N is the party in power in Punjab province, the home of the largest Christian community in Pakistan. PPP led the outgoing federal government.

While in the northwest Pakistan, Christians feel religious parties offer them more protection, voters in Joseph Colony say they will opt for PML-N for the regional assembly and PPP for the national assembly, in gratitude for their support.

“They helped us cover our losses and gave 500,000 rupees ($5,000) to each family. So all of us have decided to vote for them,” said factory worker Sohail Masih.

Pakistan’s 86 million registered voters go to the polls on Saturday to elect four provincial assemblies and 272 lawmakers directly into the national assembly.

In the lower house of parliament, another 60 seats are allotted to women and 10 to religious minorities on a party ticket based on proportional representation.

Christians cannot directly elect Christian lawmakers. They vote like everyone else for different parties, which in turn choose their Christian candidates, in a process criticised as “selection” not election.

Only two percent of Pakistan’s overwhelmingly Muslim population of 180 million are Christian. The community is poor and complains of increasing discrimination.

Last week, the US Commission on International Religious Freedom warned that the risk to Pakistan’s minorities has reached crisis level. It said blasphemy and other laws are used to “violate religious freedoms and foster a climate of impunity”.

Campaigners argue that blasphemy legislation, for which the maximum penalty is death, is often abused to settle personal scores and should be reformed.

Punjab has seen some of the worst cases. A Christian mother was sentenced to death for blasphemy in 2010. In the town of Gojra in 2009, a mob burned 77 houses and killed seven people after rumours that a Holy Quran had been desecrated.

Last year, a young Christian girl spent three weeks in jail after being accused of blasphemy before the case was thrown out, although she and her family have been in hiding ever since, fearing for their lives.

Salman Taseer, a leading PPP politician and the governor of Punjab, who called for the blasphemy law to be reformed, was shot dead by his bodyguard in protest in January 2011.

At the Sacred Heart of Jesus Cathedral, established in downtown Lahore in 1907, Father Andrew Niasari said his congregation feared conservative political parties and favoured the PML-N and PPP.

But in Peshawar, which runs into strongholds of the Taliban and other al Qaeda-linked groups, Christian candidates have aligned themselves with and sought protection from right-wing religious parties.

Pervaiz Masih was first elected to parliament on the Jamaat-e-Islami list in 2002 and is again their Christian candidate on Saturday.

He lives in Peshawar, which has been on the frontline of a six-year domestic Taliban insurgency, and believes the religious parties offer his community the best protection.

He gives an example by recalling one incident in August 2009.

“Some Christians were drinking close to a mosque in Peshawar and it was the call for prayer. When people arrived they became furious… I rushed to the site and talked to the people of Jamaat-e-Islami and convinced them to go back,” he said.

“God ordered me to work here in a religious party, I am a bridge between Christian and Muslim.”

Back in Joseph Colony, few people believe that Islamic parties can protect them.

Samuel, a medical student says he would consider voting for a religious party if it would help Christians and minorities. But ultimately he has a more radical solution: leave Pakistan because “minorities don’t have security here”.

Musharraf’s advocates back out from judges’ detention case amidst threats