Calls Imran an agent of the Jewish lobby.
By Our Correspondent
Published: May 5, 2013
Tweet Email 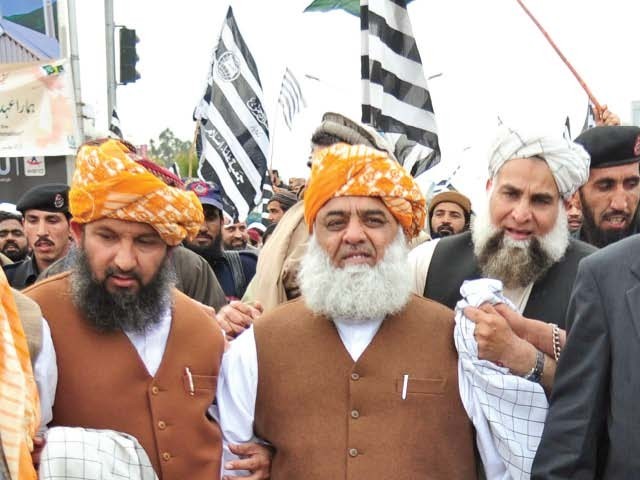 Imran Khan, according to Fazl, is being sponsored by the West and the Jewish lobby.

Fazlur Rehman used every word that would foment hatred against any person in the conservative masses of Pakistan. He called Imran an agent of “Americans, Jews, Ahmadis and a person of ill character”.

“A person who could not make his own children Muslim nor Pakistani, is dreaming of becoming prime minister of Pakistan and making the country an Islamic welfare state,” Maulana said.

“The Yahoodi (Jewish) lobby’s money is working (for Imran),” he said.

“I am asked, ‘what is the proof that he (Imran Khan) is an agent of the Jews,’ I say there is only one proof and it is my own responsible personality. I am so righteous that I would never talk ill against anyone. This is enough that Maulana Fazlur Rehman says that he is a Jewish agent.”

He went on to give a joint declaration of the clerics belonging to the JUI-F. “We the Ulema have agreed that giving vote to PTI is haram.

Anyone who casts his or her vote for Imran or to a person who is contesting election on the ticket on PTI is involved in haram and such a person is going against Sharia,” the chief of the JUI-F said.

We are being forced to make prisoners vote PML-N: Jail officials