In a "New Pakist­an" we might have a politi­cal govern­ment who yearns for the reconc­iliato­ry embrac­e over dead bodies.
By Saroop Ijaz
Published: May 5, 2013
Tweet Email 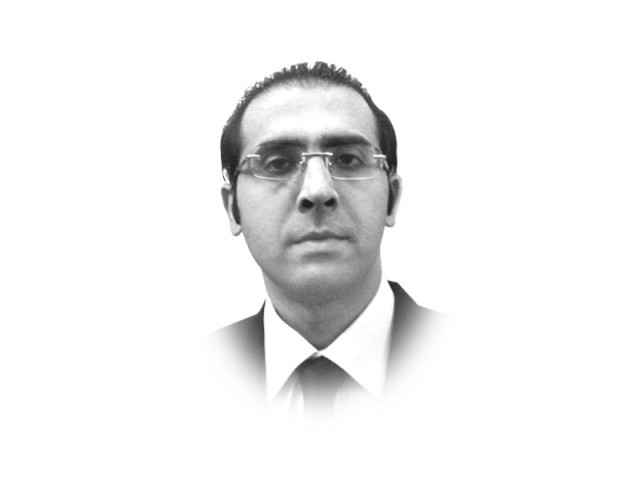 There is a simple story of a Knight who fought valiantly and saved a town from an army of invaders in medieval Europe. The residents of the town felt so indebted and thought long and hard on how to express their gratitude. At last, they came to the conclusion that his deed was so great and honourable that it was only proper that they kill him and make him a Saint. The dead are easy to hold in reverence, their causes and positions are easy to agree with. Not always in Pakistan. We kill people who save us and not satisfied, we insult their memories, their struggle. Recently there was some hope in hopeless times. General Ashfaq Parvez Kayani has finally said it: this is our war. We have to fight and win this. Bravo General.

All political parties want us to believe that they hold the struggle of our soldiers and their martyrdom in high esteem; some of them lie. Mr Imran Khan believes that the TTP are only Pashtuns and Tribals who are just annoyed because of America’s war, etc and all will be well once the “New Pakistan” is put in place. How condescending, how ignorant, how sinister it is of Mr Khan to say that. How hypocritical, how deceitful is it to then pretend to honour the martyrdom of our soldiers and civilians killed by the TTP in the same breath, or even in the same life. And it is not about some silly game of who has been to the tribal areas how many times; it is about minimum knowledge, sense and courage. In any event, there are also some other people who may know a thing or two about Khyber-Pakhtunkhwa and the tribal areas, the ANP for example. Mr Khan is not too concerned with dignity at all. Mr Khan “requested” those who are venting their anger by bombing political rallies and murdering kids to wait for a few days, the New Pakistan is just around the corner. One is supposed to be careful in the employment of adjectives for national leaders; however, national leaders are also supposed to be careful about what they say. And when they speak dangerous nonsense, it should be called out as such. He felt the need to offer a clarification on behalf of the TTP and state that these faithful brothers of ours had no role in BB’s martyrdom. Mr Khan has made a habit of saying ridiculous things about things that he has no clue. The only real clarity that he has displayed in recent times is in firmly stating that he will not amend the clauses in the Constitution that declare the “Ahmadis” infidels and doesn’t want their vote. To be fair, no one can speak of amending them right now, but then to be fair, not everyone is promising a new country.

There are other parties who also hold similar views on the TTP and the “war on terror”. It does not matter; people have already made their respective choices and will go along with them. By all means do and vote for whoever floats your boat. However, show your face when a four-your-old kid is murdered in Karachi because his father (who by the way was also killed) was contesting the election from a particular political party. Some punishment for “corruption” for the kid; is it not, serves him right for being born into a family which had affiliations with a corrupt party or maybe the kid had not done enough in his total of four years to tackle the law and order situation and had it coming. Maybe the kid deserved it since he did not stand up when others (mind you who were coincidentally almost always from his family) were being targeted etc. And this mix of cold blooded apathy and downright cruel ignorance is not to be mentioned because it hurts the fragile sentiments of some hypersensitive followers of popular national leaders. If these followers are “mature” enough to be unmoved by the killing of children, they should be able to handle their leaders being described (accurately in my view) as being pro-violence. Also, any talk of being sensitive is a bit rich coming from people who casually trample over the memories of martyrs.

There are these lines of Kipling that make themselves useful in Pakistan with some frequency. “Our statecraft, our learning, Delivered them bound to the pit and alive to the burning, Whither they mirthfully hastened as jostling for honour. Not since her birth has our Earth seen such worth loosed upon her … But who shall return us our children?” Our children are being delivered to the pit, and there is no statecraft and learning behind it. There is cowardice and opportunism.

It is campaign season in Punjab, and the funeral season in the “other” Pakistan. Realpolitik and electioneering is an excuse for a lot of things; silence or condoning murder is not amongst those. Punjab is the “New Pakistan”. It is not all of Punjab either; it is only the right kind of Punjab. The urban, educated (in the basic formal sense) and the politically aware, because you know the really unwashed, poor peasants etc. have a tendency to vote for the “corrupt” parties. Well, the TTP is working overtime to remedy that by not allowing them to campaign. Heartwarming stuff it is to see friends in need being friends indeed.

Coming back to General Kayani’s statement, it seems that the new country is destined to get off to a confused start. While the army leadership is rightly commenting on the true nature of the challenge, there is a distinct possibility that we might have a political regime that will be unwilling to put up a fight. That might be an understatement; we might have a political government who yearns for the reconciliatory embrace over dead bodies. The entire consensus circus is bound to happen again. This time, maybe with the traditional roles reversed.

I will take the “corrupt” over the “murderous” every day, all year. Oh well, don’t think about it too much, preferably not at all, thinking will be out of fashion in the new country; less thought more belief is the future, so go on now and vote for whomever you had made your mind to vote for months ago.