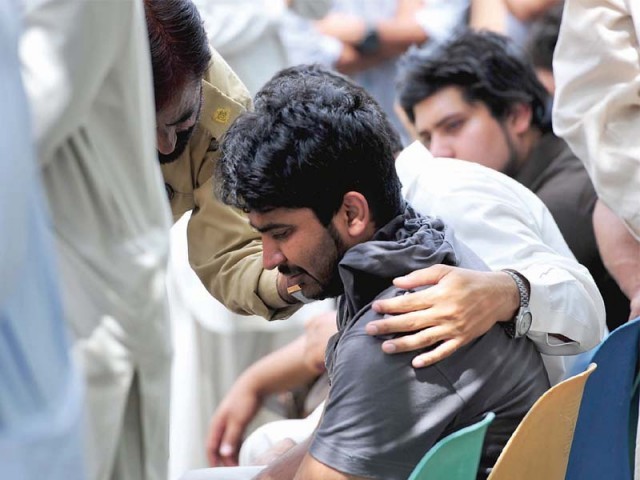 The main prosecutor in the Benazir Bhutto murder case was himself gunned down on Friday moments after he left his house in Islamabad’s G-9/1 sector.

Federal Investigation Agency Special Public Prosecutor Chaudhry Zulfiqar Ali, who also pursued the 2008 Mumbai terror attacks, was intercepted by gunmen in front of the Post Office and shot at least seven to nine times at close range. He, along with his guard, was on his way to the Anti-Terrorism Court (ATC) Rawalpindi for Benazir’s murder case hearing.

The prominent lawyer was driving the car when the assassins opened fire, fatally wounding him. The out of control vehicle ended up crashing into a footpath and killing a pedestrian. His guard, Farman Ali, was also injured in the lower back during the ambush but managed to call the police immediately after the attack.

“His security guard sitting in the front of the car was also hit, but he returned fire and injured one of the attackers,” said a police officer, who is a part of the investigation team constituted by the chief commissioner Islamabad on the orders of the interior ministry.

Zulfiqar was on his way to the ATC for the hearing of former president General (retd) Pervez Musharraf’s plea to excuse him from making a personal appearance before the court. Earlier this week, Musharraf was placed under two-week house arrest over charges that he conspired to murder Benazir Bhutto.

The hearing was adjourned till May 14 following Zulfiqar’s murder.

Police said the suspects then escaped in a car with no license plate. However, some eyewitnesses said they fled on a motorbike.

“I heard gunshots and saw the car speeding towards us. The car hit the footpath and ran over a woman who was on her way home after taking her son to school,” said Amna, a 50-year-old homeless woman present at the scene. She said the woman died at the spot. She denied seeing the gunmen.

Police said most of the eyewitnesses who recorded their statements were standing at a bus stand located a good distance away from the crime scene and they gave varying accounts of the incident.

Zulfiqar was put into a taxi by local people and driven to the Pakistan Institute of Medical Sciences but was pronounced dead on arrival.

Threats to the prosecutor

Zufliqar was given extra government security last year after receiving threats for his role in the Benazir Bhutto murder case.

His deputy, Chaudhry Muhammad Azhar, told reporters that he had received threatening phone calls from unknown numbers in Afghanistan and the tribal areas telling him to quit the case.

“We have informed the court and authorities concerned about the threats. If security is not provided to the lawyers then no one will hear any case in the future,” he warned.

A native of Jhelum, Zulfiqar is survived by his wife and sons Chaudhry Nisar and Chaudhry Qamar.

Blast at mqm office: Police yet to identify suspects