Blasts in Karachi trigger debate about calling in the army

Blasts in Karachi trigger debate about calling in the army 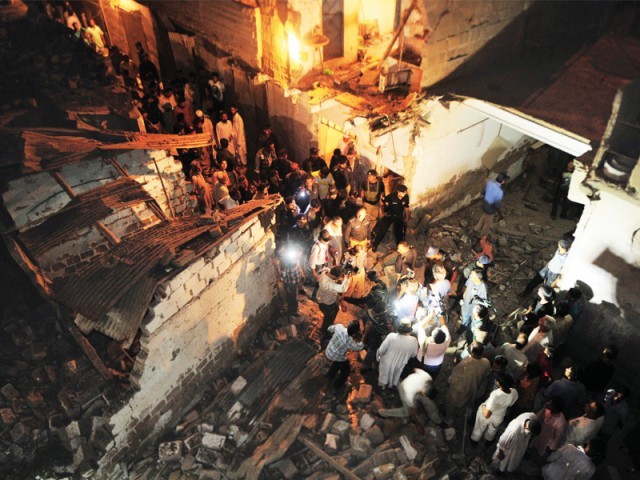 People gathered outside a party office which was attacked on Saturday night. Six people were killed when two back to back blasts took place outside the MQM office in Orangi Town while a third rocked a PPP corner meeting in Lyari. PHOTO: ONLINE

The time slot between 9pm to 10pm has become every Karachi’ite’s worst nightmare over the last six days – a string of attacks on the Muttahida Qaumi Movement, Pakistan Peoples Party and Awami National Party in parts of the city have left people wondering where the next bomb blast will strike again.

Political parties, including the MQM, ANP and the Jamaat-e-Islami have been vocal about the need for army personnel to be deployed in the city considering the sensitive law and order situation in the country. The government, however, has yet to issue any official notification.

PPP, MQM and ANP have been threatened by the outlawed Tehreek-e-Taliban Pakistan repeatedly. Despite the open warnings, police and Rangers have failed to stop the bomb blasts which started on April 23 in Karachi and have already killed 25 people.

As terrorists attack and openly claim responsibility for blasts targeting party offices, camps and corner meetings, Rangers and police have been unable to do anything more than their routine work – cordoning off the blast sites and collecting evidences.

“When the police and Rangers have been unable to curb street crime, how can they stop terrorists?” said a senior police official. “Why don’t these law enforcers just admit their failure – will the army be called in when the whole city will be destroyed by bomb blasts?” Since April 23, terrorists have carried out seven bomb blasts in the city – and all between 9pm to 10pm. “This is the time when people are usually done with their work and gather at election camps and offices, that is why this time slot is ideal for terrorists,” said an official of the Rangers. “The areas where these blasts took place are near strongholds of the terrorists and they can move freely with explosives.”

Sources in the army while talking to The Express Tribune said that the time has come for the army to take control of Karachi’s law and order situation. “Police and Rangers have clearly failed. But the army cannot come on its own as it will be accused of disrupting democracy,” said an official.

“As of now, we have not received any formal request from the federal government or the interim government, nor have we been given directions by the GHQ in this matter,” ISPR spokesperson told The Express Tribune. “The chief of army staff has already committed to providing army’s assistance in the city but timings have not been announced.”

Adviser on home affairs, Sharfuddin Memon, said that the decision to call army has yet to be taken. “The option is there but I can’t comment on it.”

On the other hand, Rangers personnel are apprehensive about what role the army could play in keeping peace in the city. “Terrorists are conducting their attacks randomly and secretly. Army or no army, they’ll be able to carry out their attacks,” said an official of Rangers on the condition of anonymity. He admitted, however, that army was needed on the day of elections to be deployed at the 4,000 polling stations in the city.

According to sources, the police officers, who want the army’s presence even before the elections, have submitted their requests to the government. “I don’t think the law and order situation is out of control. We have traced those terrorists operating in Karachi,” said DIG Zafar Bukhari. “But I do feel that the deployment of army in Karachi will help the elections run smoothly.”

Five alleged members of the Tehreek-e-Taliban Pakistan’s Fazalullah group were reportedly arrested for being involved in the first bomb blast of the year which took place at Ayesha Manzil on January 1. A motorcycle laden with explosives killed four workers and injured 45 people when participants of a rally at the Jinnah Ground in Azizabad were returning to their buses.

Six terrorists of the same group were arrested for partaking in the double bombings in Quaidabad which killed three people, on January 24, 2013.

In the third blast of the month on January 30, seven alleged terrorists belonging to TTP’s Waliur Rehman group were arrested for the attack which took place in Sohrab Goth, killing three people.

On March 3, bomb blasts in Abbas Town killed 50 people and injured 250. The alleged mastermind behind the attack, Waliur Rehman group’s Gul Aslam, along with six other members of the same group were arrested. Aslam was later killed allegedly by his own companions during CID’s raid in Surjani Town. Three alleged terrorists of the Fazalullah group were arrested on March 11, 2013, for carrying out the blast in Landhi’s Khurramabad which killed two people. On April 3, a Rangers truck was attacked in Korangi, killing four Rangers personnel and injuring several others. Suspects involved in the case have yet to be arrested.

Investigators have yet to arrest the terrorists involved in the low-intensity blast near MQM’s election office in Peoples Chowrangi on April 23, 2013. Four people were killed in the attack.

On April 25, another blast took place near MQM’s election office in Nusrat Bhutto Colony which claimed six lives and injured 11.

On April 26, an Awami National Party’s candidate, Abdul Rehman Khan Yousufzai for NA-255, escaped unhurt in a bomb blast in Landhi’s Old Muzaffarabad Colony when a low-intensity bomb blast planted in his jeep was exploded.

The same day, 11 people, including the ANP’s men and the brother and grandson of noted religious scholar Maulana Mufti Shamzai, lost their lives while 45 people were injured when a powerful bomb blast took place in Orangi Town’s Quaid-e-Awam Colony. Participants of ANP’s corner meeting were welcoming their general secretary, Bashir Jan.

One person was killed and 23 were wounded on April 27 when two blasts took place near the MQM’s unit office and imambargah Ali Raza in Orangi Town’s Qasba Colony.

On April 27, three people lost their lives and over 20 others were wounded when a powerful bomb planted on a motorcycle exploded near PPP’s corner meeting in Lyari’s Old Kumhar Wara. TTP has claimed responsibility for all the attacks since April 23.

Artists come together to dance away differences