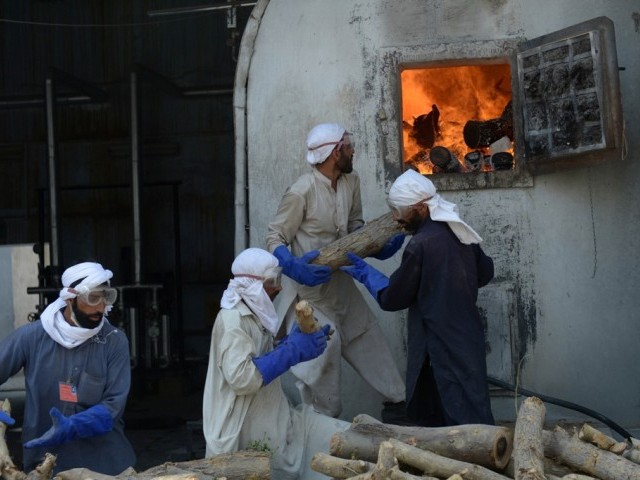 In this photograph taken on April 19, 2013, Pakistani workers use fire wood to run the boiler at the Kohinoor textiles factory in Rawalpindi. PHOTO: AFP

RAWALPINDI: When the gas and electricity go off, a textiles factory in Rawalpindi is forced to burn wood to manufacture bed sheets, a sign of just how abysmal Pakistan’s energy crisis has become.

Forget Taliban attacks, chronic power outages are arguably the single biggest voter complaint, casting a long shadow over next month’s historic elections and tying political parties into knots of promises that are unlikely be met.

At the Kohinoor plant in Rawalpindi, a garrison city near the capital Islamabad, the generators are as big as homes, the machines sit idle for up to 14 hours a day and there is little hope of reprieve when Pakistan’s 85 million registered voters go the ballot box on May 11.

“It’s ridiculous” says Taufique Sayeed Saigol, director of the factory, which employs 4,000 people – 2,000 fewer than it used to – catering to an ever dwindling overseas client base.

In Pakistan, depending on where you live, there is no electricity for between eight and 16 hours a day. Most say the cuts are twice what they were five years ago when the Pakistan Peoples Party (PPP) came to power in 2008.

“Yesterday the outage was roughly 10 and a half hours, and it stopped six times… to restart a machine takes a long time. So the total loss yesterday was 13 to 14 hours,” says Saigol.

The factory needs gas to process, print and bleach fabric, but there is no gas four days a week, so instead they have set up a wood oven.

Production has declined and the company has lost valuable contracts, such as Walmart in the United States.

The cause of the crisis is two-fold.

Firstly, the country does not produce enough electricity to meet demand. There is a shortfall of at least 2,400 megawatts a day in winter, more in summer when demand for air conditioners and fans peaks.

Secondly, the government does not pay power generation companies for the electricity it does consume. The companies in turn cannot pay their overheads or afford to import power, and the supply stalls.

So-called circular debt reached at least $4.4 billion in 2011-12 and power cuts shaved three to four per cent of GDP in the financial year 2010-11, according to the government Planning Commission.

The economy is in worse health now than in 2008. Foreign exchange reserves have dwindled to $6.7 billion, which covers less than two months of imports.

Pakistan also owes more than $4 billion to the International Monetary Fund in the next two years, its remaining debt from a loan to avert a balance of payments crisis in 2008.

Werner Liepach, the director of the ADB in Pakistan, says the only solution is to go back to the IMF, which has conditioned further loans on tax reform, considered too unpalatable in the past.

Yet politicians on the campaign trail either ignore the enormity of the crisis or make unrealistic promises that air brush pesky details.

“By and large, they all say the same thing,” says Liepach.

“They want to resolve the crisis. The issue is not what needs to be done, the issue is how to do it and I don’t think there is any clear roadmap,” he added.

The Pakistan Muslim League-N (PML-N) party of former prime minister Nawaz Sharif, expected to win and traditionally supported by industrialists, say they can solve the crisis in two years.

The party has been running the regional government in Punjab for the last five years, where it too has presided over worsening cuts.

Imran Khan, the cricket hero whose Pakistan Tehreek-e-Insaf party is tipped for a breakthrough performance on an anti-corruption ticket, sets a five-year deadline to end the problem.

The PPP claims it needs just two and a half years to end power shortages, begging the question as to why five years in office was not enough.

“I don’t believe anyone. No one does anything. They make promises and after two days they forget,” says taxi driver Muhammad Shahid queuing for compressed natural gas (CNG), a popular, cheap alternative to petrol which is also in short supply.

Saigol is tight-lipped about his own voting intentions and he does seem to know who his 4,000 staff and their families won’t vote for.

“Do you think they will vote for someone who did not solve that crisis?”