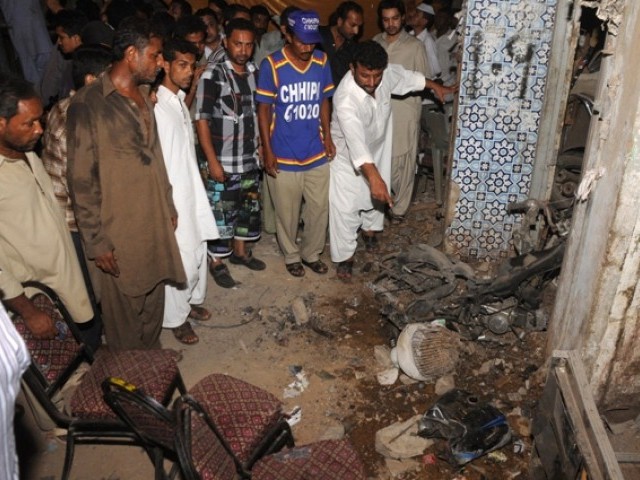 PPP supporters inspect the motorcycle which had the bomb planted on it. PHOTO: AFP

KARACHI: A blast in the Kumharwada area of Lyari in Karachi killed two people and left at least 12 wounded, Express News reported.

The explosion was reported to have occurred near a Pakistan Peoples Party (PPP) corner meeting.

The two people killed in the blast were a 10-year-old girl and a woman.

The wounded were shifted to Civil Hospital.

Rangers and Police secured the area immediately after the explosion.

The bomb was planted in a motorcycle at the site of the blast.

This is the third blast of the day, after twin blasts in the Orangi Town area of Karachi killed at least two people and left 27 wounded earlier on Saturday evening.

This is the fifth such incident of the week in Karachi. One blast targeted the Awami National Party (ANP), while the other four targeted Muttahida Qaumi Movement’s (MQM) election offices.

The Taliban have directly threatened the three main parties in the outgoing government, the PPP, the ANP and the MQM, which are often described as secular.