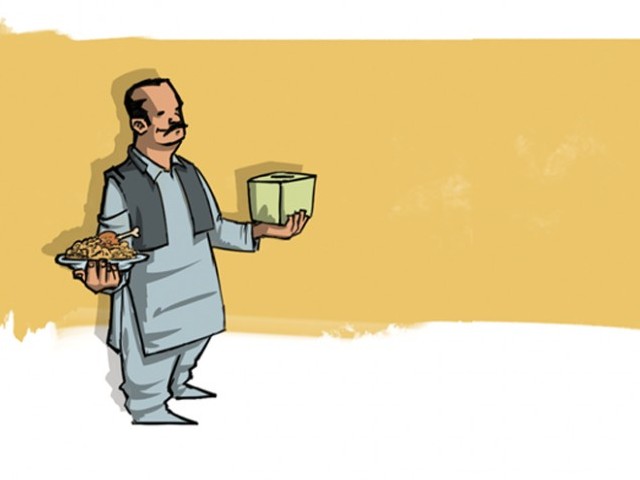 Tribesmen say they are asked not to prepare meals at home. ILLUSTRATION: JAMAL KHURSHEED

While mainstream political parties are forced to hold corner meetings instead of large public gatherings because of the looming threat of terrorism in the province, the Federally Administered Tribal Areas (Fata) remains relatively safe – and well fed.

Candidates are busy spending lavishly on meals for tribesmen, some of whom do not prepare food at home for the same reason. But while a few chalk the practice up to local tradition, others are demanding the Election Commission of Pakistan (ECP) to take notice of what they see as a clear violation of the poll authority’s code of conduct.

Candidates slaughter two or more cows or oxen at their gatherings to provide meals to the tribal voters. Waris Shah and Wasif Shah, potential voters from Mohmand Agency, told The Express Tribune the candidates offer feasts to people in order to win their support.

“We are told not to make food in our houses because the candidates prepare various dishes for whole tribes,” Wasif said, adding people do not miss these gatherings because they know once the candidate is elected he does not bother coming back to visit them. “They (voters) make the most of it (the feasting).”

A social activist from the agency, Saleem Sardar maintained it is a tribal tradition to offer lunch and dinner to guests. “This is how the candidates ensure the participation of voters, by arranging meals for the whole tribe,” he said.

Sardar, however, added the ECP needs to take action against this unnecessary spending and ensure the implementation of its rules and regulations.

Shakirullah, former president of the Mohmand Press Club, begs to differ. He said the practice of providing food makes the tradition of jirga stronger because candidates invite all the tribes to a hujra to present their manifestos.

Asghar Khan, an independent candidate from NA-36, bitterly criticised such gatherings and demanded a ban be placed on them immediately. “I do not know why the ECP is playing the role of a silent spectator while the candidates are spending lavishly and have even provided transformers in some constituencies,” he added.

Out of the 40 aspirants contesting from NA-36 Mohmand Agency, 10 are wealthy and from a tribal background. Wealth has played a huge factor in the region’s politics. In the past, candidates preferred buying the votes of the Maliks, who are influential and have strong vote banks in various parts of the tribal belt.