Two killed in twin blasts near MQM office in Karachi

Two killed in twin blasts near MQM office in Karachi 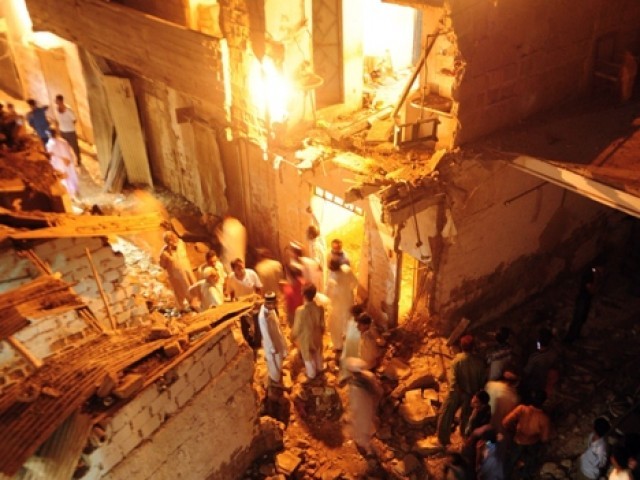 Security officials and local residents gather at the site of the bomb explosions. PHOTO: AFP

The explosions were reportedly followed by heavy aerial firing at the blast site in Qasba Colony no. 2.5, Orangi Town.

According to Express News correspondent Nadeem Ahmed, Ali Imambargah and Darul Ahad Masjid are also located near the blast site. The MQM unit office in the area was closed at the time of the blasts.

The first blast occurred outside the MQM office, while the second explosion was closer to the imambargah. Thus, it is unclear at this point whom the blasts were targeting.

DIG West Zafar Abbas Bukhari said that the first blast was carried out with explosives planted in a pick-up truck, while the second one was an improvised explosive device (IED) containing ball bearings. Eyewitnesses said the device was hurled by a man on a motorcycle.

The blasts occurred nearly 15 minutes after Qasba Colony lost electricity, according to an eyewitness.

Those injured in the explosions were shifted to Abbasi Shaheed and Qatar hospitals.

The MQM announced it would observe a day of mourning all across Sindh on Sunday. Businesses would remain closed and public transport will be halted, according to MQM’s Coordination Committee.

This is the fourth such incident of the week in Karachi. One blast targeted the Awami National Party (ANP), while the other two targeted MQM’s election offices. The MQM had shut down its offices across the city after the first blast.

The Taliban have directly threatened the three main parties in the outgoing government, the Pakistan Peoples Party, the ANP and the MQM, which are often described as secular.