For the ANP to campai­gn freely under these circum­stance­s is not just diffic­ult but nearly imposs­ible.
By Editorial
Published: April 28, 2013
Tweet Email 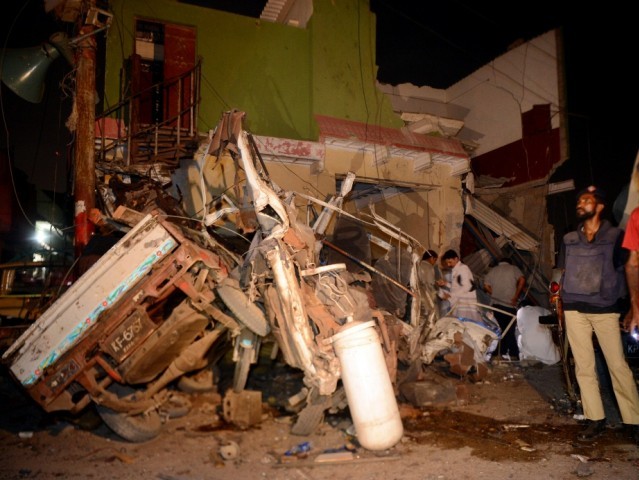 The target of the blast was ANP candidate Bashir Jan, but he remained safe in the incident. PHOTO: AFP

Every other day is a day of mourning for the Awami National Party (ANP), which has been attacked at least 10 times just this month. On April 26, two attacks were carried out against the ANP in Karachi. In the second and more deadly attack at a corner meeting of the party, over 10 people were killed and around 45 injured. The Tehreek-e-Taliban Pakistan (TTP) claimed responsibility for both attacks. The ANP has been the main target of militants in different parts of the country, especially in Khyber-Pakhtunkhwa (K-P). For the ANP to campaign freely under these circumstances is not just difficult but nearly impossible.

Despite terrorist attacks, the ANP must be commended for braving these threats and not boycotting the electoral process. Adnan Wazir, an independent candidate in K-P whose rally was attacked in the Frontier Region Bannu last month, had to distance himself from the ANP in view of TTP threats. After claiming that he had nothing to do with the party, Wazir was “pardoned” by the militant group. No wonder the ANP has started asking whether this is an election or “selection” process. The battle lines are clear. If a political party espouses liberal views, it is the TTP’s enemy. Thus, the PPP, the ANP and the MQM have directly been threatened by the TTP. Parties with ambiguous and vague approach on terrorism and the Taliban do not face similar threats.

Instead of condemning these attacks, some political parties are either silent or their condemnations have been rather muted. Not only is this a cowardly response but a highly despicable one, to say the least. Those who have been attacked and have lost their lives in terrorist attacks are Pakistani citizens. All political parties who have not condemned these attacks unequivocally should be censured. Never in the history of Pakistan have we seen an election campaign this bloody. A comprehensive counterterrorism strategy should be put in place for the elections and the caretaker government must provide adequate security to the ANP, the MQM and the PPP.