Constituency profile: Abbottabad is up in the air

Constituency profile: Abbottabad is up in the air 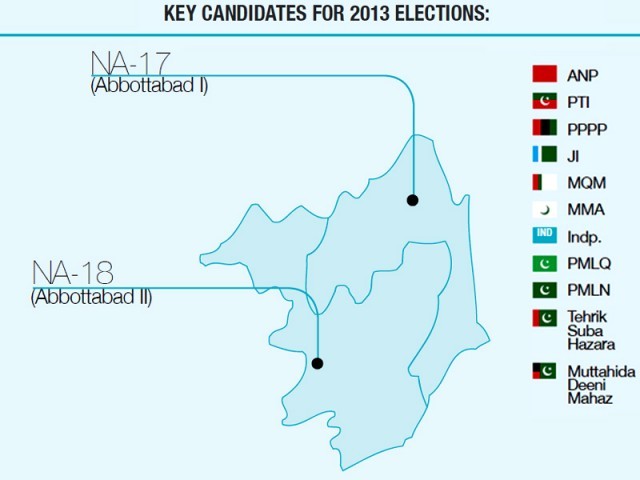 With multiple strong contenders backed by their clans, analysts say the outcome is unpredictable.

The garrison town that attracted global attention on May 2, 2011, for the infamous raid that ended Osama bin Laden’s life, is once again in the spotlight. This time, the focus is on the upcoming polls, in which analysts predict a tough competition between the PTI, PML-N and Tehrik Suba Hazara candidates.

These political warriors are set to battle it out for the two National Assembly seats – NA 17 and NA 18 – in an area where the clan and connections are more important than political ideologies.

A distinguishing factor of this electoral cycle is that former federal minister Amanullah Khan Jadoon, a senior politician who enjoys immense respect in the area, is out of the race, due to his deteriorating health.  Meanwhile, his arch rival, Pakistan Muslim League-Nawaz (PML-N’s) Sardar Mehtab Ahmed Khan Abbasi is vying to stage a second comeback.

And yet, even with Amanullah out of the picture, it will not be smooth sailing for Mehtab . He faces stiff competition from the PTI’s Dr Azhar Khan Jadoon.

Mehtab has other strikes against him, too

Although successful from 1990 to 1997, he was behind bars on charges related to the wheat scandal during the 2002 polls. He did win the seat in 2008, defeating Amanullah by a large margin, but his detractors today question his performance during the past five years, and during his stint as K-P chief minister from 1997 to 1999.

His inaccessibility to voters, the lack of development in his native area, and increased joblessness are other factors that work against him.

Although there are eleven candidates in the run for this semi urban constituency – including candidates from the influential Jadoon, Karlal, Abbasi, Tanoli and Awan clans – the real competition is expected to be between Dr Azhar and Mehtab.

Sardar Haider Zaman, chief of Tehrik Suba Hazara (TSH), was initially among the contenders but withdrew his candidature to focus on NA 18.

After Zaman’s withdrawal, the political balance has changed altogether. Although Sardar Fida Hussain is now the TSH candidate, Zaman’s supporters have jumped ship to Dr Azhar, who has also spearheaded the Hazara province movement from various platforms.  Tribal elders have been approached to use their influence to aid him in defeating Mehtab and a jirga was reportedly held at Amanullah’s residence to increase support for Azhar, a fellow Jadoon.

In this way, veteran Mehtab finds himself in even hotter waters, and PTI’s Dr Azhar may change the political landscape of Abbotabad. He is already confident of over 30,000 voters from his tribe, and if Amanullah lends his full support, this Jadoon may very well be unstoppable.

Strong trio fights it out for NA 18

The importance of NA 18 should not be ignored. Area wise, it is a very large constituency, comprising Havelian, Lower Tanawal and parts of Galiyat Valley. It plays host to the Karlal, Abbasi, Tanolis, Jadoon, Gujjar and Awan clans.

This constituency was the stronghold of the Abbasis and the Karlals, who gifted the seat to PML-N chief Nawaz Sharif twice, in 1993 and 1997. He, unfortunately, could not bring about the desired improvements to the general living standard.

However, the TSH and PTI candidates may divide the vote bank of their Karlal tribe, whereas PML-N’s Murtaza could damage his voter base due to his performance.

With these three strong contenders in the ring, the outcome seems wildly unpredictable at the moment.