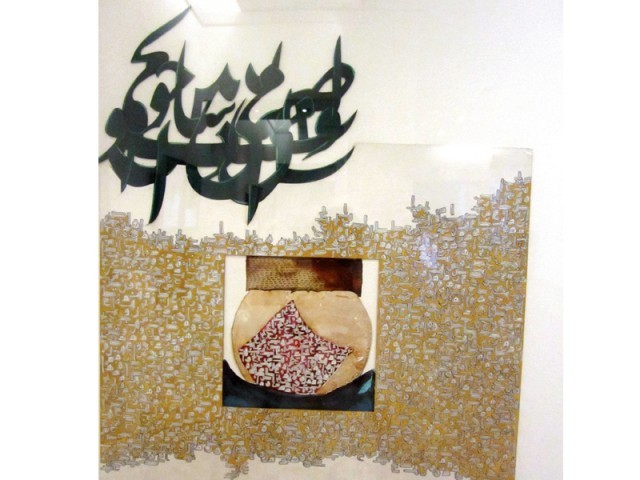 Akhtar said she had named the exhibition Nukta because a dot sets one alphabet apart from another in Arabic and in Urdu.

Calligraphy artist Noreen Akhtar said it took her about five months to complete the pieces in her first solo show that continue from her previously exhibited work.

Akhtar, who recently completed her master’s in fine arts from the College of Art and Design at the University of the Punjab, says she had decided to paint Arabic alphabets to improve her calligraphy technique.

In 2012, she had displayed a series of calligraphy pieces at the Ejaz Art Gallery in a group show.

Akhtar said she had named the exhibition Nukta because a dot sets one alphabet apart from another in Arabic and in Urdu.

“I am not very confident about using water colour as I have always been more of a script writer,” she said.

She said while making the paintings, most of them in mixed media including pointer and silver and gold leaf on cardboard, she had sought help from her teachers.

Calligraphy artists Saad Irfan Ahmad and Gohar Qalam had reviewed the compositions and helped her improve her scripture technique.

“I have mostly applied Kufic and Naskh techniques,” she said.

Gohar Qalam, a calligraphy artist for over 45 years and the author of 14 books on the subject, said very few artists had a hand as neat as Akhtar’s.

“She is also creative with her technique…a little practice has helped her improve a lot in very little time.” Qalam said.

“Once a year or so we try to display works by veteran calligraphers such as Gulgee and Ahmad Khan.” Shah said.