The collec­tion is an artist’s idea of fun and flies off on tangen­ts.
By Sehrish Ali / Photo: Myra Iqbal
Published: April 26, 2013
Tweet Email 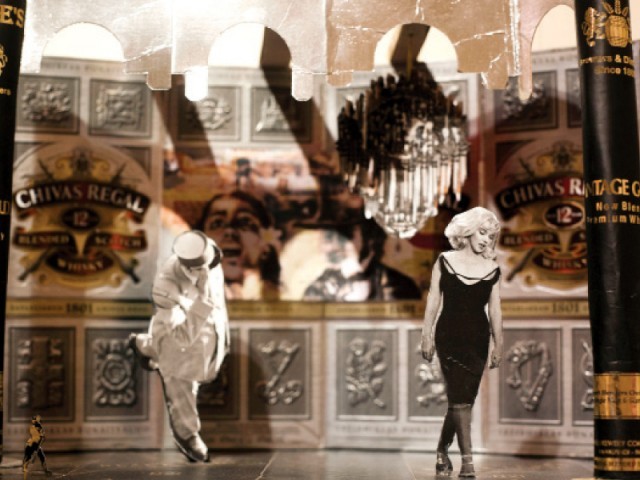 The exhibition combines a myriad of ideas into a collection of sorts. PHOTO: MYRA IQBAL/EXPRESS

Reminiscent of Bob Dylan’s lyric, “Everybody must get stoned” is a collection of quirky-meet-spunk artworks that opened at the Rohtas Gallery on Thursday. However, there is no particular inspiration and logic behind the collection.

“There is no rhyme and reason to my work, it’s tongue-in-check and a play with various materials,” said the artist, Masooma Syed. Her work boasts of a combination of cardboard, digital prints and mixed media in silver, thread and glass.

Standing out from the bulk are suspensions of cardboard and liquor bottle covers. There’s a form of Marilyn Monroe centre stage chiseled from a liquor bottle. According to the artist, the choice of materials is arbitrary. “I have worked with almost all sorts of waste material, even human hair and nails. Cardboard was something I always wanted to work with, everyone has at point or another, cut out a cardboard. It was a fun process and felt like being a child again.”

Her merry-go-round installation, cut out from a liquor bottle, resonates with the artist’s innate childlike enthusiasm as she randomly places characters whizzing by one after another.

Large digital prints on paper are much more symbolic yet with a theatrical twist that creates a cohesive balance. A glimpse of the artist can be seen in two of her pieces as she captures herself through the rear view mirror of a rickhaw.

The photographs have a touristy feel, each image is out-of-the-box and tinged with humour: a shot looking upwards towards a larger than life statue of an Indian god next to a poster of comically shocked girl, stuck to a wall. Pink-dyed goats hover around a trough of grass, munching away, oblivious to the photographer behind them. However, her miniature crafts can put any miniature artist to shame.

Working with scraps of silver, threat and glass, she takes waste and creates pieces that are beautiful to look at. The viewer is made to bend down and peer into the glass boxes as one would in a museum. A simple silver ring is broken down and created into a miniature landscape that makes the viewer realise the command over the artist’s skill. Tactile and tiny, her pieces stand just as tall amongst her large theatrical pieces. The exhibition continues till May 8.