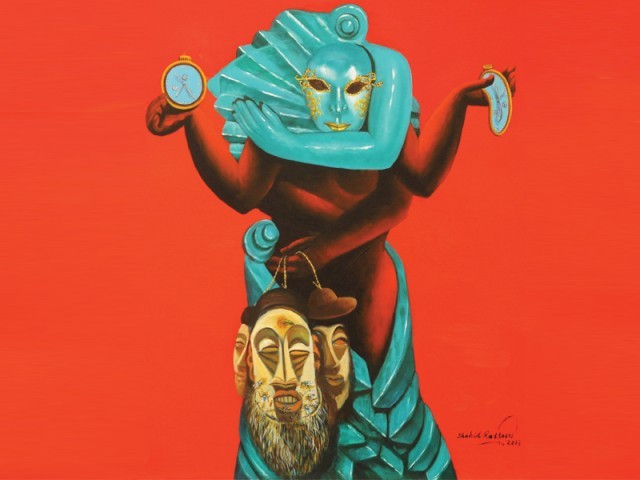 KARACHI: Man is but a puppet – limited in the scope of his knowledge by the very strings he attaches himself to for support. No matter how well-informed he claims to be, his understanding of the cosmos is always based on the theories of relativity. It is this reason that man, with all the advances in science and technology, has been unable to decipher the true concept of time.

Artist Shahid Rassam’s latest works from the series, ‘Clockwise – Otherwise’, being exhibited at the Koel Gallery until May 5, represent this mystical approach towards thoughts and worldly objects, that most of us would take for granted.

The UAE Al-Ain University Artist of the year 2000 winner gained his formal education in art at the St. Martin’s College of Arts London in 1999.  His artwork has featured in many solo and group exhibitions across the world. His cynical views and opinions on matters, such as religion, commercialism and human relationships in today’s society are widely apparent in his works.

Speaking to The Express Tribune, the artist explained the symbolic representation of the clock in his paintings by saying that time is a relative phenomenon, attributed by man to a 24-hour clock. “The way I see it, time is, however, a mystical dimension. Humans, with their limitations in the knowledge of the universe, can not understand how it works.”

He explains this with the example of Shab-e-Mairaj. “Islam tells us about the ascension, but the religious leaders cannot explain how it all happened. Such is the limitation of human thinking that he can relate and guess but never actually know.”

Explaining another painting showing a horned, bearded figure with the physical attributes of both male and female genders with a child in its lap, the artist said that, “We are all surreal beings, hiding behind masks of deception.” When a man gets into wedlock, he assumes the mask required to become a husband. Then he becomes a father, and he wears the mask of a parent. Similarly, all religious leaders are masked figures, hiding their real motives behind veils of piety, he said.

Other paintings from the series highlight Rassam’s skeptical approach towards religion. “Religion has always been used as a rallying point by people to assume positions of power. History tells us about so many things that have happened, all in the name of religion. One cannot imagine a church being run without the aid of donations,” he said.

The series contained works which had been designed based on the imprints from the business and commerce sections of newspapers. “The world today is cast under the shadows of commercialism, which has not only affected our daily lives, but also our relationships with each other. Friendships are only conducted based on mutual benefits of commercial interests. The real value of friendships and even familial relationships has been lost due to man’s obsession with monetary gains.”

Rassam has certainly justified his talents in his latest works. Apart from the apparent quality of the masterful brushstrokes, he has successfully painted his philosophical ideas onto the canvases. Speaking about his inspiration behind the work, he says, “Being an artist, my job is to raise questions. It is up to the audience to seek the answers elsewhere, wherever they may find satisfactory ones. I simply observe and paint. The rest is up the audience to decipher.”

World Malaria Day: ‘9,742 cases of malaria were reported in Sindh this year’