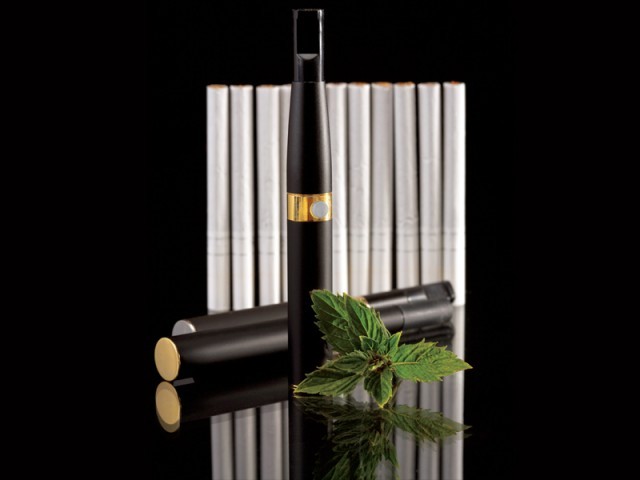 Noticed people sporting the robotic-looking e-cigarette indoors? As it turns out, it’s not necessarily the best way to kick your habit.

The people who use the electronic cigarette don’t seem to mind looking foppish while sucking on what basically looks like a colourful pen whose tip lights up. For what else is this new-fangled ‘gadget’ than just a neutered version of its carcinogenic prototype?

The e-cigarette, which is slowly turning up in mouths across main cities in Pakistan, is designed to behave just like the tobacco one but with one major difference: You don’t need a match. There is no lighting up and no smoke. This does, however, kill the theatrical production of leaning forward to light up and nonchalantly exhaling.

Instead of smoke, the inventor, Hon Lik, a Chinese chemist and engineer, found a substitute in vapour in 2003.

The e-cigarette holds a battery, a vaporiser and a cartridge filled with liquid nicotine. Taking a drag heats the liquid, turning it into a nicotine-filled vapour. As you inhale the nicotine goes to your lungs. When you exhale, it looks like you’re smoking a regular cigarette, but there’s no smell, because nothing is burning. There is no tobacco, tar or carbon monoxide.

Where can you buy them?

Electronic cigarettes are generally available in major supermarkets and kiosks in Karachi and Islamabad. They are less widely available in Quetta and in Lahore they are only available at select departmental stores. Tobacco vendors do not keep them, saying there is no demand. You can also find them at specialty cigarette stores in some cities.

How much do they cost?

is the range for a typical starter kit, which contains the e-cigarette device, a battery, a charger and several cartridges. Price depends on the manufacturer, model and style. Awais Chaudhry, who bought an e-cigarette from Liberty Market to quit smoking, says the entire kit, including an adaptor to charge the ‘cigarette’, had cost him Rs5,000.

is the price of a pack of five cartridges (each cartridge is equal to about 30 cigarettes). You can buy the liquid in bulk and refill the cartridges yourself.

Are there different types?

is the grading of the amount of nicotine in the cartridges.

They are also available in different flavours such as chocolate, cinnamon, strawberry and even bubble gum. There are also cartridges that contain liquid without nicotine, for users who want the sensory experience of smoking without its effect.

Where do they come from?

The e-cigarette is being produced by several companies in China, the United States and Europe. Most of the cigarettes available for sale in Pakistan come from China. “Our company’s electronic cigarettes come from China but these are exclusively made for us, which is why we are able to offer a warranty on our products,” says Salman Ansari, the sales and marketing manager of E-lite Corporation.

In Balochistan there is a slightly different story. “Most of the e-cigarettes available in Quetta come from China usually smuggled over the border at Chaman,” says Arif Khan, a wholesaler in the city. “I sell about 300 cigarettes every day to cigarette shops.”

Can they help you quit smoking?

The doctors T magazine spoke to were not keen on them but international opinion is still divided on the medical effects of ingesting liquid nicotine and if the e-cigarette is a healthy way to quit smoking.

“The problem with these electronic cigarettes is that just like normal cigarettes, they are extremely addictive,” says Professor Javaid Khan, who is the chairman of the National Alliance for Tobacco Control and head of Pulmonary Diseases at Aga Khan University Hospital in Karachi. “The flavoured ones are even worse, if the nicotine is irritating your throat, you won’t feel it because the flavour will mask it and you would keep on smoking without knowing.”

He said he did not recommend them as an aid or alternative to smoking. “If you want to stop smoking, you have to get away from all types of tobacco,” he advises. That means you cannot smoke cigarettes, shisha, cigars, pipes or any other tobacco products. The only way out is to consult your doctor who can prescribe approved medicines that can help.

This opinion was seconded by psychiatrist Dr Shahin Hussain, who uses hypnotherapy to help people quit at the Markaz-e-Nafsiat free clinic in Karachi. “You can’t stop unless you are motivated,” she says emphatically. And using an e-cigarette is more like a crutch.

Dr Nadeem Rizvi, who is the head of chest medicine at Jinnah Postgraduate Medical Centre, in Karachi, has seen people unsuccessfully trying to use the e-cigarette to quit smoking. “The problem is that nicotine is highly addictive,” he explains. “While the e-cigarette does not contain tar, it is still not a safe alternative to smoking regular cigarettes. I have seen numerous people who have used these e-cigs to quit smoking but have become addicted to them instead.”

Can you smoke it indoors?

E-cigarette manufacturers claim that their products can be smoked anywhere since they don’t emit second-hand smoke and they merely give off vapour. In Pakistan, there is no legislation regulating the import and sale of electronic cigarettes. Since e-cigarettes do not contain any tobacco, they may not be subject to the tobacco law, which ostensibly means that children can buy them.

Smoker Awais Chaudhry says his attempt to use the e-cigarette to quit did not last for long and he was back to smoking within a week. “It’s too much of a hassle,” he said. “You need to buy cartridges and then charge the thing… I’d rather go cold turkey than use e-cigarettes if I want to quit.”

With additional reporting by Taimoor Farouk in Lahore, Mohammad Zafar in Quetta and Obaid Abbasi in Islamabad