Say only PML-N can steer the countr­y out of prevai­ling crises.
By Our Correspondent / Shamsul Islam
Published: April 24, 2013
Tweet Email 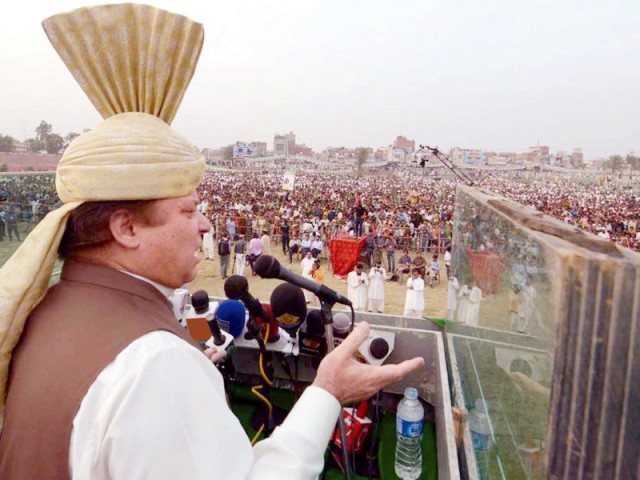 PML-N President Nawaz Sharif said on Tuesday that if his party is not voted to power, the country will remain embroiled in crises and voters will have to pay the price of their ‘wrong choice’.

“Only the PML-N can steer the country out of the mess left by the PPP-led government,” Nawaz said while addressing a public meeting in Dijkot, Faisalabad.  “I tell you, you have to vote for lion (PML-N’s election symbol), and reject the madaries (jugglers). Otherwise, you will have to live with poverty, load shedding, unemployment, lawlessness, terrorism, and other menaces.”

In the same vein, he claimed that only the PML-N could lead Pakistan onto the path of progress by introducing good governance and resolving festering crises. “The PML-N is committed to rooting out loot and plunder and nepotism and to bringing a visible change in all state-run organisations,” he added.

Nawaz said that if his party could not win a two-thirds majority in Parliament, it would not be possible to fulfill the aspirations of the masses, especially the “oppressed and depressed” classes.

He reiterated that PML-N would build a motorway right up to Karachi, and ensure peace in Balochistan, Karachi and other troubled parts of the country.

Today, the country is facing multifaceted problems because of the previous PPP-led government, he said and promised that if voted to power the PML-N would provide jobs to the unemployed youth, and offer them interest-free loans for setting up their own business.

Referring to Pakistan Tehreek-e-Insaaf chief Imran Khan, Nawaz said, “Some elements are befooling the masses. They are naive, incapable of running the affairs of the country,” he said. “He [Imran] is doing no good to Pakistan by strengthening the chances of [President] Zardari and the PPP and creating hurdles in the way of a landslide victory of PML-N.”

Nawaz’s younger brother, meanwhile, also hit out at Imran Khan at a separate public meeting in Pakpattan district. Shahbaz Sharif, former chief minister of Punjab, said that Imran Khan is a supporter of Musharraf, and wants to strengthen dictatorship.

“The media should expose Imran’s dual nature. Initially, he was Musharraf’s greatest campaigner. And now, he is demanding action against him,” he said. “We will not let any ideology of dictatorship to prosper in this country, whether in the name of cricket or in the name of democracy,” he added.

He also urged people to vote the PML-N to power. “If I can complete the Metro Bus Project in less than 10 months, then I can also end load shedding in the next two years,” he said.