Forgotten rights: Where women shy away from ballot boxes

Forgotten rights: Where women shy away from ballot boxes 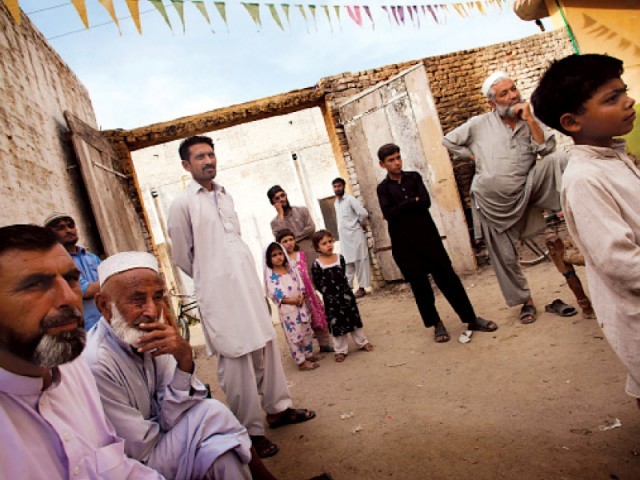 As hearsay would have it, not a single woman has cast a vote at Nisatta village of Charsadda in the last 65 years.

After decades of being outlawed from voting, an apolitical attitude has settled upon the women of the area. Confined within the walls of their mud compounds, the women uphold family honour by remaining invisible to the outside world. Few challenge tradition or demand the right to education, fearful of a backlash from local clerics whose mandate shapes the views of their patriarchs.

“It is not easy to break the resilience of such deep-rooted attitudes and traditions,” said Zahirullah, an activist, whose own wife has remained aloof from the voting process. “You could get shot for even questioning these patriarchal structures,” he added.

In 2008, a combination of crackling megaphone announcements, local jirga meetings and Friday sermons were used to reinforce the exclusion of women from the voting process. Those who managed to brave their way to polling booths were terrorised through aerial firing.

“Contesting candidates from prominent religious parties threatened to shoot us if we tried to cast a vote,” said a fiery Shahnaz during a meeting with female activists from a local NGO at Hissara Union Council.

With diminishing faith in the electoral process, Charsadda’s men see little advantage in bringing their women out to vote when they have gained nothing from their own participation in the past. “We feel like domestic animals,” said Yasmin,45, as others nodded in agreement.

Deprived of basic necessities such as accessibility to clean water, health units and education, there is consensus among the women that while the right to vote is a far cry from their current reality, their opinions about such matters are also hushed within their households where decision-making is considered the sole right of the male members of the family.

“Male heads need to be conditioned first,” said Sidra Ali, who has devoted herself to Awaz, a nascent project that promulgates an awareness of social and gender rights in 10 union councils across Charsadda.

Her claim was reinforced by Nasrullah Khan, 82. “Has a Pashtun woman ever voted here before?” his eyes grew large, and hands waved in sync with his contemptuous tone. “Why would we allow it now?”

Khan who shares a roof with a wife, daughter and five daughters-in-law is not aware that the female members of his family have rights outside of the house. To him, barring them from casting a vote is not an injustice. “People will point them out on the streets and say, look what Nasrullah’s wife is doing,” he said.

Gathered at Zahirullah’s quarters, reserved for male family members and their guests as per Pashtun tradition, Nasrullah’s views were shared by others huddled on charpoys close by.

“We live in a climate of societal ignorance,” said Anwar Taj, 31, who finds solace in blaming societal structures rather than challenging them. “We cannot even imagine our women going out among men and casting their votes. If that were to happen this time around, it would be very strange for us,” said Taj.

Some of these attitudes are a disarming reminder that such localised communities are strongholds for clerics whose sermons sway popular opinion and quite often, political allegiances. The exclusion of women from polls is more political than it is religious, though religious rhetoric serves to fill the minds of vulnerable patriarchs.

“If we give women the right to vote, then they will become equal to us,” said Naveed Jaan, “It is not supposed to be that way.”

The Election Commission of Pakistan, however, has placed a condition for a minimum of 10 per cent female voter turnout for qualification of results in K-P and Federally Administered Tribal Areas, though little is known whether such austerity will actually be observed, especially in villages such as Nisatta where the situation is complex and security at polling stations is used as a ploy to reduce female turnout.

“In 2008, our campaigning was focused on convincing women to embrace their right to vote,” Awami National Party Provincial Vice President Shagufta Malik, said. The party has come under attack by several religious outfits for its secular stance. “Now our campaigns are encouraging women to overcome their fear of terrorism at polling stations,” she added.

Armed with internal forces discouraging female suffrage, the battle to bring Nisatta’s women to polling centres will be a tough one.

“It will take a long time for these men to accept shifting gender roles,” said Zahirullah, apologetic for an attitude that he himself is partially unwilling to let go of. “I will take my wife to vote this time though,” he said, almost reassuringly.