Winds of change?: PTI chief promises to free nation from US oppression

Winds of change?: PTI chief promises to free nation from US oppression

Addres­ses multip­le gather­ings, says May 11 will mark the beginn­ing of a new era.
By Our Correspondents
Published: April 23, 2013
Tweet Email 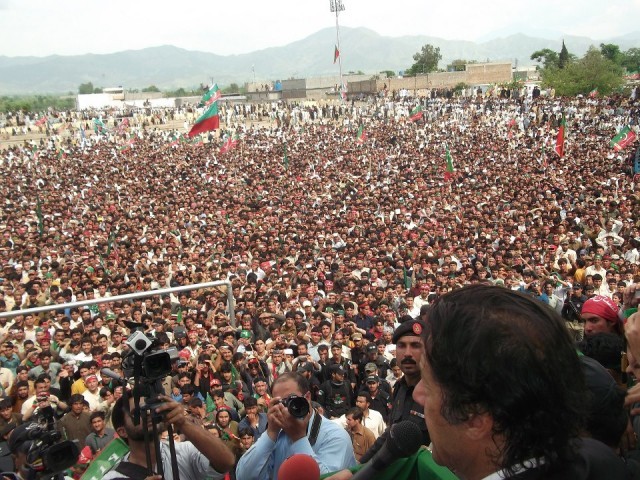 “We will strive hard to emerge with the new Pakistan within three weeks of being voted into power,” says PTI Chief. PHOTO: Pakistan Tehreek-e-Insaf

A day after promising to pull out troops from Waziristan, the Pakistan Tehreek-e-Insaf (PTI) Chief Imran Khan on Monday pledged to free the nation of ‘American slavery.’

Khan addressed party activists in Malakand, Lower Dir and Upper Dir, saying May 11 will mark the end of a corrupt government and the beginning of a new Pakistan.

The convention in Dargai, Malakand was packed with thousands of activists, mostly comprising the youth. Khan told the gathering the PTI has chalked out a plan to free the nation from American slavery and the war imposed by the US in the region. According to him, the PTI would ensure Pukhtuns live in peace in their homeland after years of suffering and hardships.

The cricketer-turned-politician said his government would negotiate with Afghanistan and save the nation by pulling out the army from the war against militancy, which “Pakistan is fighting for the US.”

“We will strive hard to emerge with the new Pakistan within three weeks of being voted into power,” he said, adding Pakistani citizens would finally be treated as respectable people across the globe.

In his address in Och area of Lower Dir, Khan took the anti-America rhetoric up a few notches. “We will destroy the partnership of the US and its slaves, and will take the country out of their clutches. We will not let our army fight for other people.”

“The spirit of faith cannot be defeated by money and weapons,” he said, claiming the era of parasites sucking on the blood of the common man is over.

The PTI chief said his party would form an Islamic welfare state where everyone would be provided free education and health facilities. Stressing on brain drain, Khan said the youth would be provided adequate opportunities so that they don’t run off to foreign countries in search of employment.

At his last address in Warhi tehsil of Upper Dir, Khan said many investors and businessmen have left the country because of the unstable law and order situation created by politicians. He promised to lure back investors by restoring peace in the region.

Recounting the days when people from other countries thronged to Pakistan for employment, Khan said he would bring about change at the grassroot level during his term of governance. “The new era is soon to begin,” said a charged Khan, adding he just needs a chance to change the destiny of the people.

Khan also hit out at other political forces, urging the people to shun Zardari and Nawaz Sharif in favour of PTI, saying he would not make shallow promises like other leaders have in the past.