A rendezvous with promising young talent, Deepak and Fahad

A rendezvous with promising young talent, Deepak and Fahad 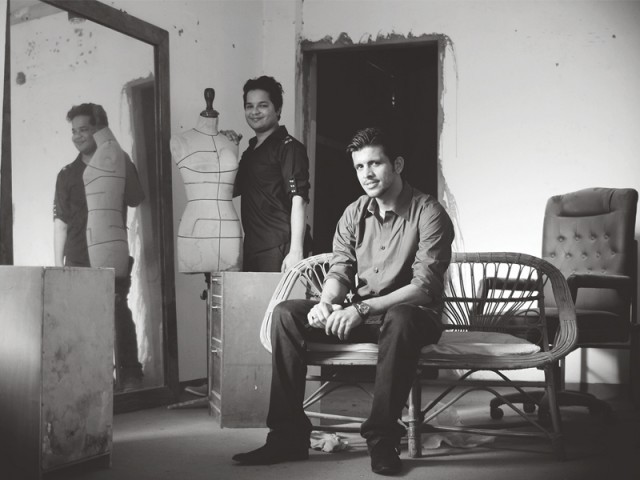 They feel the younger generation is more flexible than the older lot when it comes to new styles and trends. PHOTO: MUHAMMAD HASEEB SIDDIQUI

Talent speaks for itself. Designer duo Deepak n Fahad (DnF) entered the fashion industry merely about a year ago but they expediently made space for their label, primarily menswear, in consumers’ minds. In conversation with The Express Tribune, the brains behind the brand, Deepak Kumar and Fahad Yaqoob, reveal how it all began.

“We make stuff that is wearable, edgy and simply fashion forward,” says Fahad. Their Keffiyah collection at Fashion Pakistan Week (FPW) last year portrayed just that. “We do look at international fashion forecasts but that’s just for the sake of colours and never trends.”

For Deepak, designing is more of a hobby “that mints money” while Fahad confesses that it’s his passion. It probably makes more sense now why Deepak is a dentist (graduated from Altamash Institute of Dental Medicine) by profession and Fahad a business graduate (from Mohammad Ali Jinnah University) who also holds a diploma in fashion design from the Asian Institute of Fashion Design (AIFD).

Fahad enthusiastically says, “We are childhood friends, mohallay ki dosti hai!” They grew up together but went to different schools. Fahad, the talkative and more extroverted one, admits that he always had an eye for fashion; he was into contrasting and matching colours in outfits since he was a little boy.

They both feel that Pakistani men are fashionable, and are ready to add exciting pieces to their wardrobe. Fahad feels the industry has evolved since the first fashion week took place in the country in 2008 followed by the launch of Pakistan’s first fashion channel Style360. “It has taken a huge 180-degree turn, to the right,” he laughs.

“The younger lot is still willing to experiment — those who are in schools and colleges do opt for different colours,” he continues. “But it is difficult to impose these colours on people at times. Tell someone to wear red pants and they still have those stereotyped views about it.” Regardless, Fahad feels the younger lot is still more flexible; office-goers and men in their mid-20s still stick to regular browns and blues when it comes to picking out pants.

It may surprise you to learn that DnF showcased its first collection with just five shirts, five pairs of pants and zero investment. They admit that taking part in fashion week was a game-changing experience. “The Fashion Pakistan Council has been very supportive. The senior members guided us on how styling is done and were very kind,” says Fahad. “The first time we were on the ramp, it was nerve-wracking. But the stalwarts of the industry motivated us throughout.”

“The first time around, we were told that our collection was funky yet immature,” he continues about the response they received from the audience. However, following their showcase at FPW 2013 earlier this year, Fahad was happy to hear some positive feedback. “We were informed it was a mature collection,” he smiles.

When asked what inspires the two, Deepak says it’s the work of Jazib Qamar and Zaheer Abbas. Fahad, on the contrary, turns to the west for inspiration. “Marc Jacobs defines elegance and Vivian Westwood has madness in her collection which is completely awe-inspiring,” adds Fahad.

Currently, they stock their collections at Modas in Karachi, AP Gallery and Ramp in Islamabad and House of Brands and Tehzeeb in Lahore. Their presence on Facebook however, has attracted more orders — with five to 15 orders a day — with clothes priced between Rs2,500 and Rs10,000.

The response they’ve received from Islamabad and Karachi is great so far but Lahore is still too early to judge as they only recently started stocking there. “Jealousy and underestimation are factors that are present in the fashion industry,” says Fahad, adding it is upsetting at times.

In the near future, they plan to open their own flagship store in either Khadda market or Zamzama.