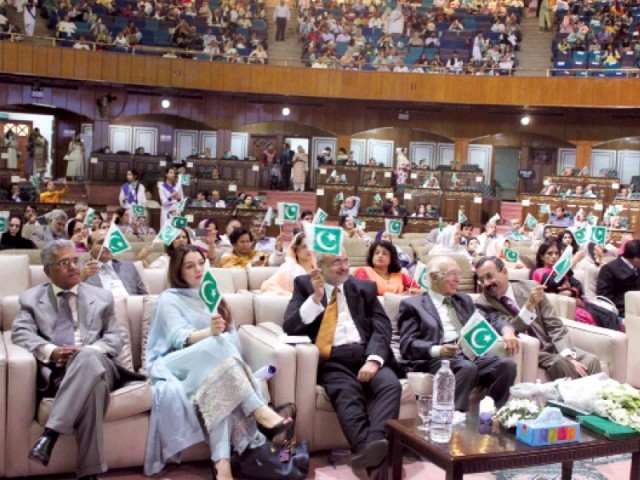 The colourful high achievers ceremony was held at the Convention Centre on Saturday. PHOTO: WAQAS NAEEM/EXPRESS

Academic excellence must be used as a stepping stone towards meaningful contributions to society, said the speakers at a ceremony organised by Beaconhouse School System (BSS) on Saturday.

The BSS Northern Region was celebrating the achievements of its students at a colourful high achievers ceremony at the Convention Centre in Islamabad. Around 800 students were awarded for their academic achievements in the O’ and A’ levels Cambridge International Examinations for 2010 and 2011.

The keynote speaker, journalist Talat Hussain, told the students to understand the concept of empathy. Hussain, while congratulating the students on their academic brilliance, said the students should think about ways in which they can improve the society.

“Do you have the energy to contribute towards a social cause?” Hussain asked the students in the audience. “You are high achievers, but you should strive to be complete achievers by contributing positively to our society.”

Chief Guest Sartaj Aziz, who is also the vice chancellor of Beaconhouse National University, spoke about the brain drain concept and urged students who wish to study at universities abroad not to forget about Pakistan.

“I hope that you will resolve to come back and serve your community and country, because the future of the country is in your hands,” Aziz said.

Former Beaconhouse student Tanyah Hameed, who received a world distinction in A’ levels Psychology in 2010, was one of the many students honoured at the ceremony.

Hameed, who is currently a student at the National University of Sciences & Technology’s business school, said she remembers being pleasantly surprised when she first found about her world distinction in 2011.

“I felt very happy because I had worked hard for it,” Hameed said. “But I was already in my first semester of university when the news broke, so at first I could not believe it.”

She said current students should not only focus on academics but also be active in extracurricular activities because it would help them in their undergraduate studies.

BSS Northern Region Executive Director Nasir Kasuri had a similar message for the students and their parents during his address.

“This brilliant academic result is only one characteristic of the students’ complete school experience,” Kasuri said. “Apart from academics, our teachers have guided students to participate and excel in various co-curricular programs ranging from public speaking to international competitions to sports among others.”

He also thanked the parents for their involvement in their children’s education.

Beaconhouse students who participated in the school’s international internship programme were also acknowledged at the ceremony. Students also entertained the audience through musical performances.

At the event, Khadija Shahper Bakhtiar, a BSS alumna, also briefed the audience about the Teach for Pakistan initiative which she started in 2010.

Is the Lahore Metrobus a folly or far-sighted?