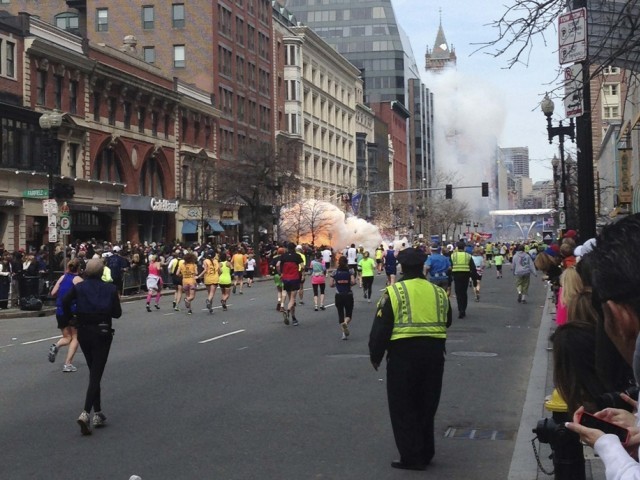 Secretary of State said that on a trip to Japan he heard that some students were afraid to study in the United States. PHOTO: REUTERS

WASHINGTON: The death of a Chinese student in the Boston bombings presents a potential image nightmare for US higher education, determined to counter perceptions that the United States is unsafe.

A Chinese woman studying for a master’s degree in statistics at Boston University was identified among the three dead in Monday’s attack on the city’s famed marathon, which also wounded some 180 people.

Violence is hardly unique to the United States and few expect a sudden exodus of foreign students who often have already spent tens of thousands of dollars on their US education or consider US universities to be exceptional.

But when students decide whether to study abroad and weigh factors such as quality and cost, attacks such as those in Boston – or gun massacres at Virginia Tech in 2007 and Sandy Hook Elementary School in December – can only be downsides.

Secretary of State John Kerry, speaking before the Boston attacks as US lawmakers considered a failed bill on gun purchases, said on a trip to Japan that he heard some students were afraid to study in the United States.

“One of the responses I got from our officials from conversations with parents here is that they’re actually scared. They think they’re not safe in the United States and so they don’t come,” Kerry told CNN.

The number of Japanese students heading to the United States has fallen since the early 1990s due to factors that likely also include an aging population and a stagnant economy.

China is the top sender of international students, so any trend would have major effects. Foreign students contribute $22.7 billion to the US economy by paying tuition and other expenses, according to the Commerce Department.

In surprise data announced just days ago, the Council of Graduate Schools reported a five percent decline in applications by Chinese students to US graduate programs after years of strong growth.

Three countries alone — China, India and South Korea — make up about half of the foreign students in the United States, according to the Institute of International Education, a non-profit group that supports exchanges.

Gary Rhodes, director of the Center for Global Education at the University of California at Los Angeles, said that safety was always a factor when choosing a university, including for Americans.

“Most students — whether on campus or abroad, or international students — have a very positive experience. But whether it’s in the US or other parts of the world, there are safety challenges that happen and anytime they do, it’s very tragic,” he said.

Badger, who recently retired, expected universities’ programs, costs and location to remain key factors. She said that US students did not shy away from Madrid and London after attacks in the two popular cities in 2004 and 2005.

“Safety is certainly a concern, but random acts of terrorism, by their very nature, can happen anywhere, in any country, in big cities or small towns,” she said.

The number of foreign students enrolled at US universities declined for three consecutive years following the September 11, 2001 attacks due not only to safety concerns but also to the tightening of visa regulations.

Educators say that the United States has made progress in recent years in speeding up visas for students at a time that competitors for students — notably Britain — have imposed stricter visa rules.

The United States remains by far the biggest host of international students, taking in nearly 765,000 in 2011 — nearly twice as many as second-placed Britain, according to a US government-backed survey.

A recent survey by Australia’s Lowy Institute for International Policy found that Indians were most favorable about studying in the United States, although they also had positive views about other Western nations and Singapore.