Childhood on canvas: Young artists make a ‘memoir of the future’

Childhood on canvas: Young artists make a ‘memoir of the future’ 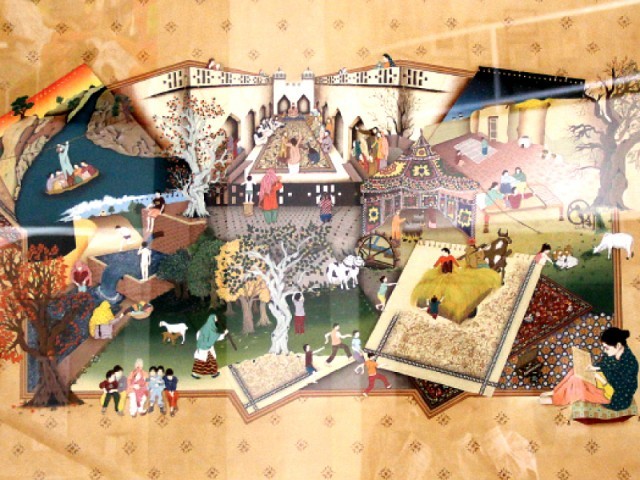 As many as six participating artists are from Lahore, while the rest are from Sindh. PHOTO: SHAFIQ MALIK/EXPRESS

Pages From My Diary is a documentation of artist Saba Saleem’s childhood memories. For the 69 by 109 cm piece, Saleem has patched paintings that depict activities like children playing, carpet weaving and river rowing. The things are what she remembers of her village, which is near Muridke in the Punjab.

Saleem, who holds a masters in arts from Punjab University, has two paintings on display at the Memoir of the Future: The Young Artists’ Exhibition at the Lahore Arts Council. She and nine others won a Rs10,000 prize each and were awarded a certificate for their work.

About 350 artists had contributed over 500 paintings for the exhibit of which about 400 have been put on display. As many as six participating artists are from Lahore, while the rest are from Sindh. Many of the artists seem to have taken their inspiration from themes like self-exploration, conditioning and childhood.

Alhamra Art Gallery curator Tanya Suhail says that the entries this year were focused on ‘futuristic art’. “Most of the work is impressive,” Suhail said of the art on display.

Kiran Riaz, another member of the top-ten club and a graduate of PU’s College of Arts and Design, has used her work to reflect her sentiments while she interacts with others.

Amna Manzoor, whose pieces on conditioning of domestic women across Pakistan received praise at the National College of Arts thesis display earlier this year, was also part of the exhibition. Manzoor said she had titled the work ‘Becoming’ because women take up certain activities and adapt to prepare for their lives ahead. She will soon display her work at the Ejaz Art Gallery.

Brush Knitted Memories 1 and 2 by Sidra Liaqat is also a statement on her childhood, in which she has painted strings of wool ‘as a bridge between the past and present’.