Speake­rs at confer­ence take up the case of Hazara­s, forced conver­sion of Sindhi Hindus.
By Our Correspondent
Published: April 12, 2013
Tweet Email 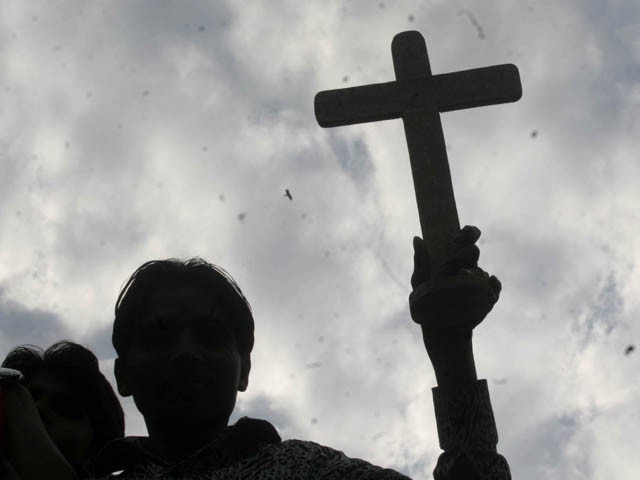 Scholars and civil society discussed the deteriorating situation of the minorities and threats posed by the religious extremists and society’s outdated customs. Speakers at the closing ceremony of the two-day South Asian conference on ‘Religious Minorities and Human Rights:

Challenges and Opportunities’ stressed the need for making use of modern technology and social media for countering the threats.

The conference was organised by the Pakistan Institute of Labour Education and Research (PILER) at the Regent Plaza Hotel.

The case of Balochistan’s embattled Shia Hazara community was the first to be taken up when Abdul Rahim Changezi of the Balochistan University criticised the failure of political parties and civil society in highlighting their plight. “After the killing of over 1,100 Hazaras, people are scared to open their businesses. Everybody in the community prefers to stay at home because of fears of being targeted.”

He also spoke about the deadline given to the Hazaras to leave Balochistan by December 2013, failing which they would have to face further atrocities. “We are under siege. Our children cannot go to schools because their school buses are being targeted. Nobody other than the nationalist parties, civil society and media dared to condemn the criminals.”

He, however, still expressed optimism, saying that the peace-loving people in the country outnumber the warmongers. Raising voice against the latter and equipping the police with modern technology is all that is needed to counter the extremists, he added.

Next in line were the Hindus of Sindh. Dr Sono Khangharani, a member of the Dalit Solidarity Network, shared his observations regarding forced conversions in Sindh and drew the participants’ attention towards the discrimination faced by then. He said that they are not allowed to become deputy commissioners and military officers and safety of the country is cited as the justification for this discrimination. Khangharani also spoke about unequal treatment in education opportunities and delivery of healthcare. He asked that the word ‘minority’ be defined properly and called for an end to discrimination in the name of class, creed and sect.

Later, Peter Jacob of the National Commission on Justice and Peace presented his views on the hate content in syllabi. Even taking the matter to the high court did not work, he said, adding that the material is published in Urdu Bazaar, Lahore and then distributed across the country via radio stations and amplifiers.

“This hate content should be declared abusive and steps should be taken to control it,” said Jacob.

Putting an end to biases

The Sindh caretaker human rights minister, Anis Haroon, discussed the historical background of religious discrimination in the country and told the audience how it was started in the early days by a particular class for a specific purpose. “Peace, prosperity, brotherhood and tolerance has vanished from our lives. It is the responsibility of the majority to ensure the rights of the minority.”

Concluding the discussion, Sindh High Court Chief Justice Mushir Alam called for concerted efforts in all South Asian states to ensure harmony and pluralism for lasting peace in the region. Justice Alam said that intolerance is common in all South Asian countries as majority in one country is a minority in the other. He conceded that there were some weaknesses in the judiciary but it was on the right path. “It is true that there are weaknesses in the courts but our judiciary has given attention to the issues of minorities and granted them equal rights.”