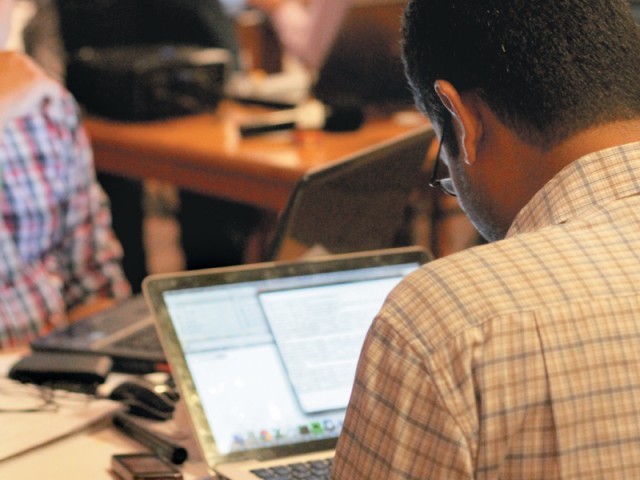 Eleven teams of hackers, web developers and residents of Karachi toiled on their laptops for six hours and came up with 10 ideas to solve the city’s problems. PHOTO: AYESHA MIR/EXPRESS

On Sunday, some of Karachi’s residents did the impossible. They decided to stop complaining about the city’s problems and do something meaningful to address them. Eleven teams of hackers, web developers and concerned citizens toiled on their laptops for six hours and came up with 10 ideas, which included text messaging services, android applications and web programmes, during a ‘Civic Hackathon’ – the first ever to be held in Pakistan – organised by Sheba Najmi, PeaceNiche, P@SHA and Pring at The Second Floor.

The four judges – Sabeen Mahmud, Imran Moinuddin, Farzal Dojki and Shahjehan Chaudhary – gave the participants feedback on their projects. One of the teams had tried to address the problem of bribes in their project, Report a Rishwat. They had set up a text messaging service in which any person, who received the demand for a bribe, could report the incident which would be catalogued in a web system set up by the team. The database would also rate various institutions, including hospitals and police stations, on the amounts of bribes they allegedly received.

“People feel powerless when it comes to dealing with corruption,” said Jeremy Higgs, who made the project with three other team members. “We want them to feel that they can change the system.”

Another group had come up with a text messaging service through which people would be able to receive a complete list of documents for multiple tasks, such as applying for a passport or driving license. “People have the right to have access to these basic services on their fingertips,” said one of the team members. They even planned to launch an android application of the service.

Animals were also taken care of as another group came with the project, Animal Rights Pakistan, which would allow people to get help for injured animals on the roads. A network of volunteers would be set up that would arrive at the site and make sure the animal is seen by a vet.

Najmi, who worked for seven years at Yahoo after completing a degree in symbolic systems from Stanford, explained why she had decided to switch paths and take up city planning. “I wanted to do something meaningful with my life,” she said. “I decided to work as a fellow for Code for America with a two-third pay cut. It was the best thing that happened to me.”

During the fellowship, Najmi worked for a year with 25 other fellows to create web applications that addressed the problems faced by cities all over the world.

“There is a big gap between the applications that are available and what people want,” Najmi explained. “There is a lot that the people feel that the city government should do and it hasn’t. The governments, on the other hand, must achieve a lot with a limited amount of resources.”

She recalled the overwhelming positive response her team got when they pitched their ideas to various city governments. “Representatives of the New Orleans government told us that if they had gone through the regular channels, the same applications would have taken two years and cost them two million dollars.”

The idea behind the hackathon in Karachi was to make residents and the government realise that they could change things on their own.

Najmi plans to return to the US, gather funding and then open up an NGO in Pakistan to assist its cities in innovating and launching new projects.

Correction: In an earlier version of this story, one of the judges Farzal Dojki was mistakenly mentioned as Farzan. The error has been fixed.