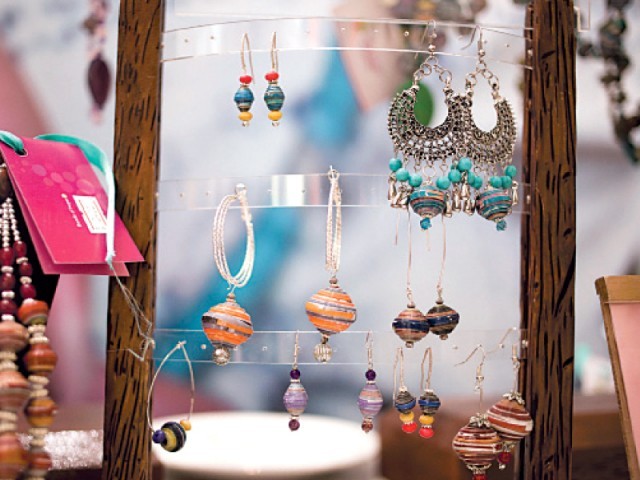 A range of hand-embroidered items from rural Pakistan were on display at the “Stitching and Chai” exhibition, which opened at the Nomad Art Gallery on Saturday. The ten-day event showcases hand-embellished products made by home-based female entrepreneurs.

An extensive assortment of embroidered items prepared by more than 450 women working under 15 female group leaders in villages in south Punjab, Khyber-Pakhtunkhwa, and Sindh were exhibited. Conventional work symbolising the local cultures of these areas such as aari, ahir, chikankari, and chunri on exquisite kurtas, dupattas, stoles, tops, quilts, shawls, and lifestyle products such as bags, floor and throw cushions, lamp shades, mobile covers, and wall hangings were among the main features. Many local and foreign visitors were seen picking out the different products.

“The work is distinctive and is not available in markets here,” said Sara Awan Khan “It’s also come from far-flung areas where we normally don’t travel to,” she added.

The exhibition had been organised with support from the United States Agency for International Development (USAID) Entrepreneurs Project.

Speaking to The Express Tribune, Rashida Riaz from Bahawalpur said she had been in the business for more than six years, but ever since she became a part of the programme, her profits have doubled. “I have been a part of this programme for the past year and it has been extremely beneficial for my business,” she said. Riaz said that approximately 50 women that work with her have benefited greatly from the initiative. The items featured different techniques such as Tarkashi, Marvi sheesha, Balochi Taanka, Chickenkaari, Chaarsuti, Kacha-Paka Taanka, Mukaish, and appliqué.

Farhat Somroo, another artisan, said hundreds of women in Multan now earn a living through the programme.

According to a press statement issued by the gallery, the Entrepreneurs Project Specialist Angela Braid explained that exhibitions such as this aid in improving the marketing and product development abilities of female sales agents and women embellishers. Despite the potential for women embellishers to earn a good living and contribute to the national economy, most of them remain trapped in a cycle of poverty caused by issues of mobility and access to market information, customers and trends.