JS shareholders’ dispute breaks down into a brawl

JS shareholders’ dispute breaks down into a brawl 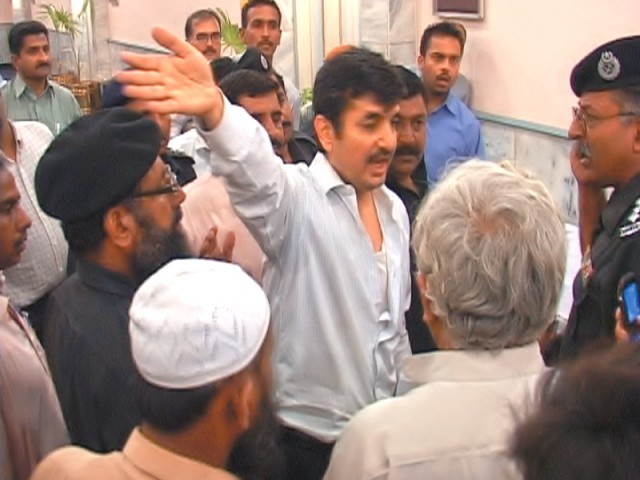 Tempers flared at the annual shareholders meeting of Jahangir Siddiqui & Company on Friday, turning the normally serene meeting of the investment bank’s stakeholders into something resembling a bar-room brawl, complete with loud yelling matches, fisticuffs, broken doors and ripped clothes.

The trouble started shortly before the meeting was due to start at 11 am at the Regent Plaza Hotel in Karachi on Friday morning. Shareholders began arriving and were asked to produce their original CNICs, which many of the investors were not carrying on them. In response, some of the minority shareholders got agitated, yelling and screaming at the staff.

Hearing the trouble outside the hall, company officials closed the doors of the room, hoping to keep the trouble away from the meeting. But the shareholders were so determined to attend the meeting, come hell or high water, that they broke down the door of the meeting hall and continued their loud, disruptive protest inside the meeting hall.

Once inside, the protestors began yelling at the people already present inside the hall, claiming they were not real shareholders but “fake people” whom the company had brought in to rubber stamp the management’s decisions. Sources at JSCL say that it is common for many of their employees who are also shareholders in the company to attend the annual meetings.

It appears that JSCL had been anticipating problems. The venue had a significant presence of private security guards and at least two dozen policemen were at the hotel, to help keep order. They began to force the protestors out of the meeting hall, at which point fisticuffs broke out, with many protestors claiming they were beaten by the police.

Ghani Osman, one of the main shareholders who has publicly had a dispute with the management, appears to have arrived after the scuffle started. He joined the protests and was also forcibly removed from the hotel premises by the police and briefly taken into custody.

Osman is the CEO of Ghani Osman Securities, and the largest shareholder in Al-Abbas Sugar Mills. The JS Group has accused Osman and Al-Abbas Sugar CEO Shunaid Qureshi of embezzling from the company. Osman, in turn, alleges that the Rs424 million bonus paid out to Ali Jahangir Siddiqui, son of the founder of the company, was in violation of company policy.

After a brief period of calm, Qureshi got up to ask pointed and hostile questions of the company’s management. The police tried to forcibly remove him from the premises, during which another scuffle broke out and Qureshi’s clothes were ripped.

Many of the minority shareholders who had joined the protest appeared to be sympathetic to Osman’s allegations against Ali Jahangir. Some who spoke to the Daily Express said that they were unhappy with the fact that Ali received a Rs424 million bonus but the shareholders were only given a Rs0.75 per share dividend (an amount that comes out to a total of Rs572 million).

After the end of the meeting, Ali Jahangir Siddiqui and JSCL CEO Suleman Lalani declined to answer any questions from the media.