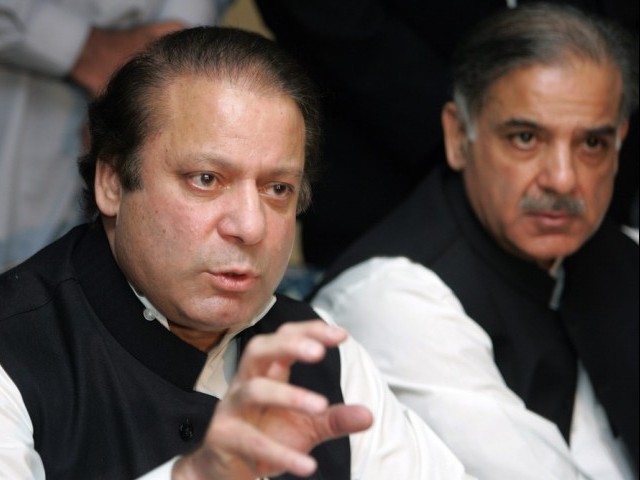 The two brothers were found accused of loan default in the Hudaibiya Paper Mills scandal by the NAB during the scrutiny of their nomination papers. PHOTO: TMN/FILE

The National Accountability Bureau (NAB) has passed on information to election authorities about three graft references against Pakistan Muslim League-Nawaz’s leadership, an official said. The references are pending in the Accountability Court, Rawalpindi.

The move drew an angry response from the party, whose spokesman counselled the corruption watchdog not to do “politics”. The party intends to give a detailed response at a press conference on Friday.

NAB’s reply to the Election Commission of Pakistan (ECP) is part of the scrutiny process of candidates and it has not spared PML-N chief Nawaz Sharif and ex-provincial chief minister Shahbaz Sharif.

The two brothers were found accused of loan default in the Hudaibiya Paper Mills scandal by the NAB during the scrutiny of their nomination papers, sources told The Express Tribune.

The record was sent to the returning officers (ROs) through the ECP. The NAB found that the Sharif brothers were accused in the case of loan default of Rs3,486 million rupees in the Hudaibiya Paper Mills case.

NAB records show that the Sharif brothers had filed a petition for quashing the First Information Report (FIR) against them in the Lahore High Court (LHC) and the case was still pending. “In that respect, they [Sharifs] were still accused in the default case,” said an official.

The case was filed in March 2000 with the Attock NAB Court where the Sharif brothers were accused of misusing their authority and accumulating wealth beyond their means. The other accused included their third brother Abbas Sharif, Nawaz Sharif’s son Hussain Nawaz and his daughter Maryam Nawaz, Hamza Shahbaz, and Senator Ishaq Dar.

“The competent authority to decide the candidature of the Sharif brothers were the respective returning officers and not the NAB,” said a NAB spokesperson while reacting to television reports that the NAB had objected to the candidacy of the two PML-N leaders.

The NAB spokesperson said that the bureau has neither raised objections on any candidate during the scrutiny of the nomination papers nor has it returned the name of any candidate with objection to election commission.

NAB has received more than 18,000 nomination forms and it has only provided the information that was to be provided to the special cell of the poll body.

But the PML-N directed its wrath at the anti-corruption authority. A party spokesman said NAB’s objections against Nawaz Sharif and Shahbaz Sharif were based on mala fide intentions.

“NAB should not do politics but rather it should refrain from becoming a party in this regard”. The NAB’s report against the Sharif brothers is part of a well-calculated conspiracy.

He said the PML-N will disclose facts at a news press conference on Friday (today).

In a separate statement, PML-N’s spokesperson Senator Pervez Rasheed said there is no discrepancy in the assets declared on the nomination papers of the PML-N president.